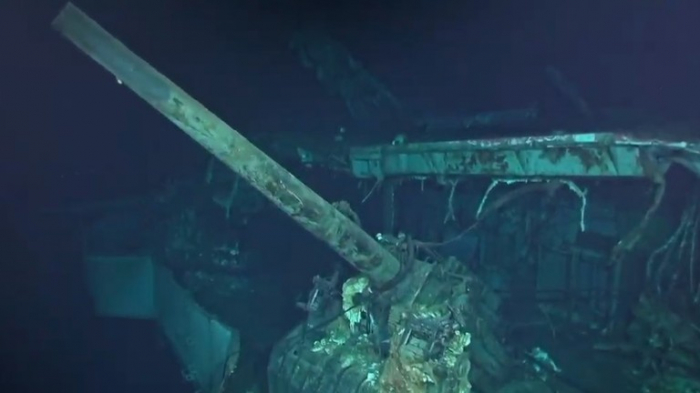 USS Hornet, the legendary aircraft carrier that fought at Midway and launched the Doolittle Raid on Tokyo, was sunk in 1942. Now, after 77 years, her wreckage has been found three miles deep on the bottom of the South Pacific.

The Hornet was last seen in October 1942, sinking after being fatally struck by Japanese torpedo and dive bombers in the Battle of Santa Cruz Islands, part of the Guadalcanal campaign. Most of her 2,200-strong crew managed to abandon ship, but 140 were lost.

Now, thanks to the late Microsoft co-founder Paul Allen, the Hornet can be viewed again after a concentrated effort by the research vessel R/V Petrel to pinpoint exactly the location of the carrier's watery grave.

Before her untimely demise, the Yorktown-class carrierhad already attained immortality in military history books as the staging platform for the Doolittle Raid. The daring April 1942 operation saw 16 US Army B-25 bombers take off from the carrier to bomb Tokyo in revenge for the Japanese attack on the US fleet at Pearl Harbor in December 1941. It was the first US air raid on Japan’s Home Islands, with the bombers led by Colonel 'Jimmy' Doolittle suffering heavy losses.

The Hornet also played a major part in the US victory in the Battle of Midway in June 1942, considered the turning point in the Pacific War against Imperial Japan.

Allen, who was a naval history enthusiast, was the founder of Vulcan Capital, the organization that owns the Petrel, and set out on a number of missions to locate famous wrecks of WWII-era warships from the US, UK, Japanese and Italian navies.

In 2017, the Petrel shot to fame after discovering the wreckage of the USS Indianapolis. The 1945 sinking of the Indianapolis was one of the worst naval disaster in US history, with around 900 of the heavy cruiser's crew perished at sea, many eaten by sharks.

The Petrel's most recent discovery was in March 2018, when it discovered another US carrier, the Lexington, sunk during the Battle of the Coral Sea.

Back on the high seas in January, the Petrel's mission to find the Hornet had started in the archives looking at both national and naval records to locate the last known location of the ship. The team also looked at the records of the Imperial Japanese Navy as well as the log books of nine US warships who fought alongside the Hornet on that fateful day in October 1942.

That information was then charted on a map to form a search grid, and an autonomous underwater vehicle (AUV) was then deployed to search below. Using sonar technology and a video footage fed from the underwater drone, the team came across and confirmed the wreckage 17,000 feet (5.1 kilometers) deep in the South Pacific, near the Solomon Islands.

"We had Hornet on our list of WWII warships that we wanted to locate because of its place in history as an aircraft carrier that saw many pivotal moments in naval battles," Robert Kraft, Vulcan's director of subsea operations, said in a statement announcing the find.

Kraft added that the find was an "honor" to the memory of Allen, who lost his battle with cancer in October 2018.

Witnessing the discovery in real time with CBS News was 95-year old veteran Richard Nowatzki, who at 18 served as one of the Hornet's gunners on the day the carrier sank.

"The actual fact that you can find these ships is mind boggling to me," he added."I want to thank you for honoring me this way."

Calling himself "very fortunate" to witness the discovery after such a long time, he joked, "If you go down to my locker, there's 40 bucks in it, you can have it!"