Kachin women from Myanmar raped until they get pregnant  in China 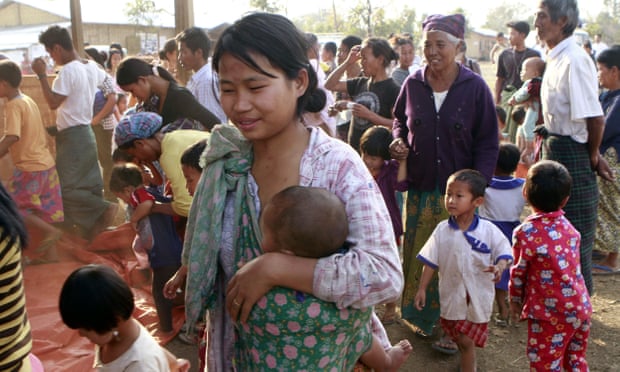 Women from Kachin minority are allowed to go home only if they leave a baby behind, says HRW report.

Burmese and Chinese authorities are turning a blind eye to a growing trade in women from Myanmar’s Kachin minority, who are taken across the border, sold as wives to Chinese men and raped until they become pregnant, a report claims.

Some of the women are allowed to return home after they have given birth, but are forced to leave their children, according to an investigation by Human Rights Watch, titled Give Us a Baby and We’ll Let You Go.

One survivor said: “I gave birth, and after one year the Chinese man gave me a choice of what to do. I got permission to go back home, but not with the baby.”

China is grappling with a severe gender imbalance; the percentage of the population who are women has fallen every year since 1987. Researchers estimate that factors including sex-selective abortion, infanticide and neglect of female babies mean that there are 30 to 40 million “missing women” in China, who should be alive today but aren’t.

That means millions of men are now unable to find a wife, and there has been a rise in trafficking across the borders of neighbouring, poorer nations.

Many of the Kachin women are trafficked out of Myanmar by their relatives, friends or people they trust; in one case a woman was betrayed by someone from her bible study class. They are often promised jobs across the border in China, and discover only after they cross over that they have been sold into sexual slavery.

“My broker was my auntie, she persuaded me,” a woman who was trafficked aged 17 or 18 told Human Rights Watch. Over three years, HRW spoke to nearly 40 victims who had escaped, or been allowed to leave but without their children, many still struggling to deal with the emotional impact.

All came from, and had returned to, Myanmar’s northern Kachin state or neighbouring Shan state, where the ethnic Kachin have been fighting the government for decades. A 17-year ceasefire ended in 2011, and the renewed conflict has displaced more than 100,000 people and left many struggling to survive.

With men taking part in the fighting, women often become the only breadwinners for the families, and with jobs badly paid and hard to find, many feel that they have no choice but to pursue work in China where wages are higher even for illegal migrants.

“The dearth [of work or legal] protections have made these women easy prey for traffickers, who have little reason to fear law enforcement on either side of the border.”

Myanmar’s government reported 226 cases of trafficking in 2017, but experts told Human Rights Watch they believe that the real number is much higher.

There are few incentives for trafficked women or their relatives to seek official help. Families seeking police aid to track missing daughters, sisters and wives were turned away in Myanmar, or were asked for money, HRW found.

Many of the areas where the women are trafficked from are controlled not by authorities in the capital, Yangon, but by the opposition Kachin Independence Organisation, so the government has no record of what is happening there.

In China, when some survivors tried to seek help from security forces, they were jailed for immigration violations not supported as crime victims.

Those who were repatriated were often simply dumped at the border, stranded far from their community, the report found. And if they do make it back, they face social stigma, and little chance of getting justice, even if they tried to seek it.

“When Myanmar authorities did make arrests, they usually targeted only the initial brokers in Myanmar and not the rest of the networks in China,” the report found. “Police in China almost never to our knowledge arrested people that knowingly bought trafficked ‘brides’ and abused them.”