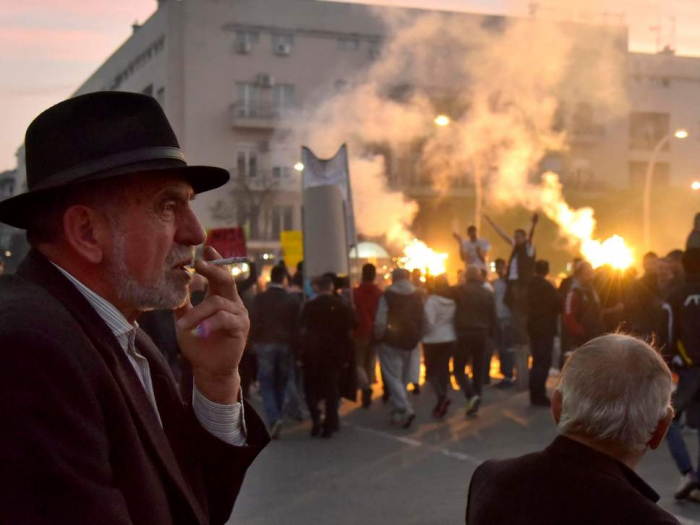 It all started with a video posted on social media: a secret recording from 2016 that appears to show a well-known local tycoon hand over an envelope containing bundles of cash to a party associate of Montenegro's long-standing leader.

The prominent businessman, a former close friend and confidant of Montenegrin president Milo Djukanovic, released the video late last year in retaliation for charges filed against him for fraud and money laundering, which have prompted him to flee to London to avoid prosecution.

The tycoon, Dusko Knezevic, also gradually released a series of documents accusing the president and his ruling party of corruption, cronyism and abuse of office, claiming he has cashed-in millions of dollars to Mr Djukanovic and his ruling party so the authorities turn a blind eye to his shady business dealings.

The "Envelope Affair" has triggered weeks of anti-Djukanovic protests, demanding the resignation of one of Europe's longest-lasting leaders after his almost 30 years in power.

The anti-government demonstrations came as similar protests were taking place in neighbouring Serbia and Albania where demonstrators are also seeking the ousters of leaders whom they accuse of autocratic rule and corruption despite their proclaimed bids to take their countries into the European Union.

The almost simultaneous eruption of strong anti-government movements in the region has prompted talk of a "Balkan Spring," in reference to a wave of protests and revolutions across the Arab world in 2010.

While none of the protests so far have managed to unseat Balkan leaders, they have encouraged civic resistance and shaken their firm grip on power and the support they have been receiving in the West.

In Montenegro, Mr Djukanovic has long faced accusations of corruption and links to organised crime. The recent video was seen as the most serious blow to his so-far unchallenged rule.

Mr Djukanovic denied the accusations, in an interview with the Associated Press saying that pro-Russia opposition parties and "foreign factors" are behind the protests even though they are formally led by civic groups.

He suggested the protests are aimed at unseating pro-EU leaders and turning the Balkans away from the West in favour of closer ties with Russia.

"I think that (throughout the Balkans) this basically is not a 'spring' movement, but rather a bleak autumn movement," he said. "We are talking here about attempts to stop the Balkans" from joining the EU."

Montenegrin protest organisers insisted the demonstrations represent a genuine civic movement without any foreign or opposition party influence. Their weekly rallies have drawn thousands of people in the biggest such gatherings in years.

"The trigger was that envelope which was given by a businessman who belonged to the heart of the regime to the former Podgorica mayor, with the intention to bribe voters" in 2016 parliamentary election, said Dzemal Perovic, an organiser of protests in the Montenegrin capital.

"Our goal is the change of the regime," he said. "A peaceful transition from a corrupt regime that has been in power for 30 years and which has won elections through bribery and rigging."

Since coming to power in late 1980s, "Milo the Czar" — as he is commonly called in Montenegro — has been calling the shots as president, prime minister or party leader thanks to his switching between posts. But he has also been a key Western ally in countering Russian influence in the region and previously for splitting from former Serbian strongman Slobodan Milosevic during the wars of the 1990s.

In Serbia, populist president Aleksandar Vucic has also portrayed himself as a pro-European leader while facing accusations of curbing democratic and media freedoms at home. Political tensions soared last month when protesters burst into the state TV building angry over the station's reporting that they view as biased.

The incidents were the first in months of peaceful marches throughout the country that started after thugs beat up an opposition politician in November. The demonstrators are demanding Mr Vucic's resignation, free elections and media, and more democracy. They plan a major rally next week in Belgrade to press for their demands.

Mr Vucic too has sought to downplay the protests as an attempt by the opposition to seize power by force while pro-government media have blasted opposition leaders as foreign stooges.

Albanian opposition parties have returned to the streets since mid-February calling for the government's resignation and an early election. There, the centre-right opposition accuses the leftist Socialist Party government of prime minister Edi Rama of corruption and links to organised crime, which the government denies.

Those protests have been violent, with Albanian opposition supporters repeatedly trying to enter the parliament or government buildings in Tirana and police using tear gas and water cannons to stave them off.

"The common characteristics of all those protests are that people are dissatisfied with the long-standing and corrupt regimes, the anger which has accumulated for years, if not decades," Montenegrin political analyst Stevo Muk said.