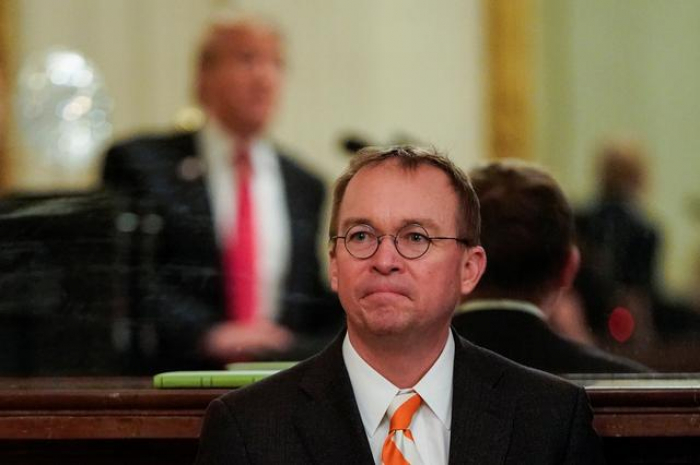 Asked on “Fox News Sunday” if congressional Democrats will succeed in obtaining the Republican president’s tax returns, Mulvaney said: “No, never. Nor should they.”

He dismissed an effort to obtain the returns, launched on Wednesday by U.S. House of Representatives tax committee Chairman Richard Neal, as a political ploy from Democrats who will never stop attacking Trump.

“Democrats are demanding that the IRS turn over the documents. That is not going to happen, and they know it. This is a political stunt,” Mulvaney said.

Democrats countered that Neal’s request to the Treasury Department for Trump’s returns is grounded in law and a needed inquiry, given Trump’s refusal to disclose his tax records and to divest himself of his business interests.

“This is a legitimate authority that the Congress has. This president, by the way, is the least transparent president that we’ve had in half a century,” Democratic Representative Dan Kildee, a tax committee member, told ABC’s “This Week.”

Democratic Representative Ben Ray Lujan noted that presidents for decades have voluntarily released their income tax returns. “This is not political, as our Republican colleagues are making it out to be,” he told “Fox News Sunday.”

An attorney for Trump on Friday blasted House Democrats’ request for six years of Trump’s personal and business returns as “a misguided attempt” to politicize the tax laws, accusing lawmakers of harassment and interference in IRS audits.

In a statement that mapped out the legal battlefield ahead, Trump lawyer William Consovoy said the request filed by Neal flouts “constitutional constraints.”

Republican Senator Mitt Romney urged Trump to release his tax returns as promised but criticized Democratic efforts to force the issue through legislative action as “moronic.”

“The courts are not going to say that you can compel a person running for office to release their tax returns,” he said on NBC’s “Meet the Press.”

One of many investigations targeting Trump on Capitol Hill and in the U.S. court system, the House Democrats’ probe into the president’s tax returns could pull back the curtain on his business empire and his reputation as a dealmaker.

As a presidential candidate in 2016, Trump broke with a decades-old practice of making his tax returns public and continues to refuse to release them as president, while retaining ownership in many enterprises, ranging from golf courses and hotels and other properties.

If Congress takes the administration to court over Trump’s taxes then little case law would be available to help guide judges, legal experts said, both because the statute cited by Neal to obtain the returns has hardly ever been contested, and because most document disputes between the legislative and executive branches of government are resolved by negotiation.

The losing party could appeal, ultimately to the U.S. Supreme Court. If litigation extends into 2021, a judge could also force a newly elected Congress to start the process over, said Ross Garber, an attorney who specializes in political investigations.