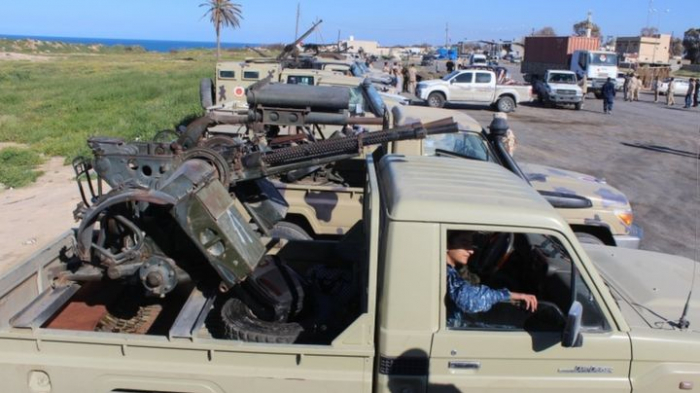 Libyan military strongman Khalifa Haftar pushed on with his assault on Tripoli Monday, defying international calls for a ceasefire days into a battle that has left dozens dead.

At least 35 people have been killed in fighting since Haftar's forces launched their assault Thursday, Libya's unity government said, while the UN says thousands have been displaced.

Oil-rich Libya has been rocked by violent power struggles between an array of armed groups since the NATO-backed overthrow of dictator Moamer Kadhafi in 2011.

Haftar, a former Kadhafi military chief, has emerged as a major player, his self-styled Libyan National Army backing an administration in the country's east in opposition to the UN-backed unity government based in Tripoli.

Having seized control of much of eastern Libya and buoyed by a series of victories in the desert south, Haftar turned his sights on Tripoli this month, vowing to "cleanse" it of "terrorists and mercenaries".

After a pause overnight, fighting resumed Monday morning around the capital's destroyed airport, some 30 kilometres south of Tripoli, and the rural area of Wadi Rabi further east.

World powers have expressed alarm at the violence, saying it threatens to further destabilise Libya and derail UN-led efforts to find a political solution to the country's woes.

The US has appealed for an "immediate halt" to combat operations and the UN Security Council has called on Haftar's forces to halt their advance.

On Sunday Russia blocked proposals for the council to adopt a formal statement, instead insisting that all Libyan forces be urged to stop fighting, diplomats said.

Moscow is a key supporter of Haftar, along with Egypt and the United Arab Emirates.

But the Kremlin on Monday urged "all sides to reject actions that could provoke bloodshed in battle and the deaths of civilians".
Fierce clashes Sunday near Tripoli saw Haftar's fighters and an array of powerful western Libyan armed groups exchanging fire including air strikes.

Forces backing the Tripoli-based Government of National Accord on Sunday announced a counteroffensive named "Volcano of Anger".

Spokesman Colonel Mohamed Gnounou said it was aimed at "purging all Libyan cities of aggressor and illegitimate forces", in reference to Haftar's fighters.

Unity government health minister A'hmid Omar told Libya's Al-Ahrar television station late Sunday that around 50 people had been wounded along with those killed.

His ministry on Monday put the death toll at 35.

Haftar's forces have said 14 of their fighters have died.

She again urged the warring parties to implement a temporary humanitarian ceasefire.

The previous day, fighting raged throughout a two-hour window set by the UN for a pause in hostilities for civilians and the wounded to flee.
Haftar's offensive has threatened to plunge the country into a full-blown civil war and once again thwart diplomatic efforts to find a solution to Libya's woes.

It was launched just days ahead of a planned UN conference aimed at uniting Libya's rivals and paving the way for elections.

Envoy Ghassan Salame has insisted the UN was "determined" to go ahead with the April 14-16 conference.

The UN mission in Libya said on Twitter that Salame met Monday with unity government head Fayez al-Serraj in Tripoli to discuss how to "assist at this critical and difficult juncture".

Libya's UN-backed government says 21 people have been killed and 27 wounded in fighting near the capital, Tripoli, BBC reported.

US Secretary of State Mike Pompeo has called for an immediate halt to the fighting and called for talks.

Rebel forces under Gen Khalifa Haftar have advanced from the east with the aim of taking Tripoli.

Prime Minister Fayez al-Serraj has accused him of attempting a coup and says rebels will be met with force.

Among the dead was a Red Crescent doctor killed on Saturday. Gen Haftar's forces said they had lost 14 fighters.

Earlier the UN appealed for a two-hour truce so casualties and civilians could be evacuated, but fighting continued.

And in a statement, Secretary of State Pompeo said the US was "deeply concerned about fighting near Tripoli" and stressed the need for talks.

"This unilateral military campaign against Tripoli is endangering civilians and undermining prospects for a better future for all Libyans," the statement said.

International powers have begun evacuating personnel from Libya amid the worsening security situation.

Libya has been torn by violence and political instability since long-time ruler Muammar Gaddafi was deposed and killed in 2011.

Gen Haftar's Libyan National Army (LNA) forces have been carrying out a multi-pronged attack from the south and west of the city since Thursday.

The UN said its call for a humanitarian truce had been ignored and emergency services said they had not been able to enter the areas where fighting was taking place.

However a UN spokesman told AFP that they were "still hoping for a positive response".

On Sunday the LNA said it had carried out its first air strike, a day after the UN-backed Government of National Accord (GNA) hit them with air strikes on Saturday.

Fighting has continued around the disused international airport south of the capital that Gen Haftar earlier said his forces had seized.

Forces loyal to the GNA have slowed the advance and on Sunday a GNA spokesman told Al-Jazeera TV that the GNA now intended to "cleanse" the whole of the country.

UN-backed talks aimed at drawing up a road map for new elections have been scheduled for 14-16 April in the Libyan city of Ghadames.

UN envoy Ghassan Salame insisted the talks would go ahead, unless serious obstacles prevented it, saying "we won't give up this political work quickly".

But Gen Haftar has said his troops will not stop until they have defeated "terrorism".