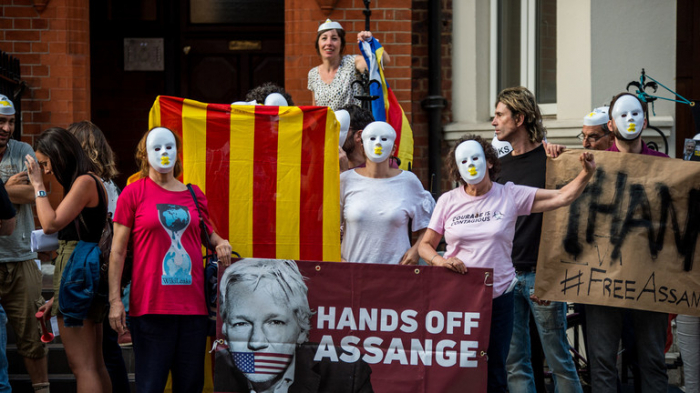 WikiLeaks Editor-in-Chief Kristinn Hrafnsson has alleged that an extensive spying operation was conducted against WikiLeaks founder Julian Assange during his time in the Ecuadorian Embassy in London.

During an explosive press conference, which is still underway, Hrafnsson alleges that the operation was designed to get Assange extradited. WikiLeaks claims that it was told that Assange’s extradition was imminent.

“We know that there was a request to hand over visitor's logs from the embassy and video recordings from within the security cameras in the embassy,” Hrafnsson said, adding that he believes the information had been handed over to the administration of US President Donald Trump.

Cameras used within the embassy in the last year have the capacity to record audio meaning that every single meeting held by Julian Assange with his doctors and lawyers have been recorded, according to former Consul of Ecuador to London, Fidel Narvaez.

“Ecuador is not protecting Julian anymore,” Narvaez said at the news conference, adding that the Ecuadorian government is doing everything possible to end his asylum. Ecuadorian President Lenin Moreno has repeatedly accused Assange of breaching the terms of his asylum.

A trove of audio, video, and photographs from a medical examination and copies of Assange’s lawyer’s notes, among other, private legal documents allegedly emerged in Spain and were used by a group who attempted to extort €3 million from WikiLeaks, it was claimed.

“I am told that the ringleader has a prior conviction on similar charges… there is a possibility that this one person was not Spanish but Spanish-Speaking,” Hrafnsson said of the extortion conspirators.

Narvaez also alleged that Moreno is using the Assange crisis as a smokescreen to cover up a major corruption scandal that both he and his family are involved in. He claimed that, as a credible pretext to extradite Assange, the government is selling the idea that Assange has hacked President Moreno’s phone, despite Assange’s lack of internet access and with no evidence to substantiate the allegations, and no verification of the claims carried out.

Chelsea Manning, who leaked the sensitive documents which sparked Assange’s asylum saga, was arrested recently and jailed for reportedly failing to testify in a sealed case rumored to be against Assange.

During a question-and-answer session following the press conference human rights lawyer and barrister Jennifer Robinson confirmed that WikiLeaks was not approached by the Mueller inquiry “at any point”.

Assange sought asylum in the Ecuadorian Embassy in London in 2012 following WikiLeaks’ publication of sensitive information regarding US operations in Iraq and Afghanistan. There are widespread fears that Assange will be extradited to the US and may face the death penalty.