Notre Dame was ‘15 to 30 minutes’ away from complete destruction 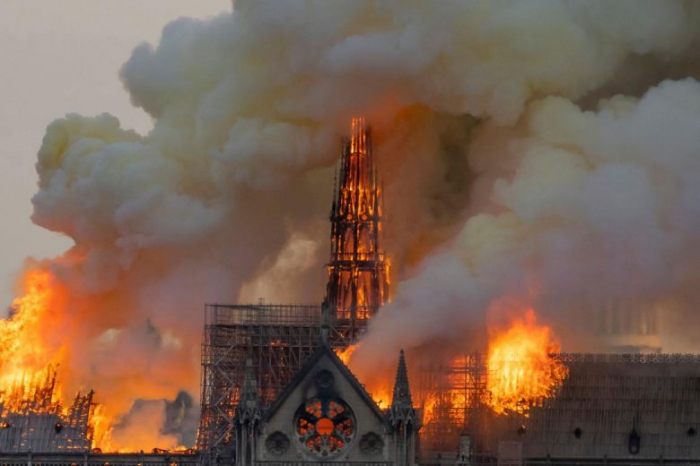 Notre Dame Cathedral was within “15 to 30 minutes” of complete destruction as firefighters battled to stop flames reaching its gothic bell towers, French authorities have revealed.

A greater disaster was averted by members of the Paris fire brigade, who risked their lives to remain inside the burning monument to create a wall of water between the raging fire and two towers on the west facade.

The revelation of how close France came to losing its most famous cathedral emerged as police investigators questioned workers involved in the restoration of the monument to try to establish the cause of the devastating blaze.

More than €650m (£562m) was raised in a few hours on Tuesday as French tycoons and global corporations announced they would donate to the restoration campaign launched by the president, Emmanuel Macron.

But as the emergency services picked through the charred debris, a row was resurfacing over accusations that the Unesco-listed cathedral, immortalised in Victor Hugo’s novel The Hunchback of Notre Dame, was already crumbling before the fire.

The cathedral is owned by the state and has been at the centre of a years-long dispute between the nation and the Paris archdiocese over who should finance restoration work to collapsed balustrades, crumbling gargoyles and cracked facades.

Jean-Michel Leniaud, the president of the scientific council at the National Heritage Institute, said: “What happened was bound to happen. The lack of real upkeep and daily attention to such a major building is the cause of this catastrophe.”

After the conflagration was declared completely extinguished, 15 hours after it started, the junior interior minister, Laurent Nunez, said the structure had been saved but remained vulnerable. He praised the actions of the firefighters but admitted the fate of the cathedral had been uncertain. “They saved the edifice, but it all came down to 15-30 minutes,” Nunez said.

In a surprise televised address on Tuesday evening, Macron said he wanted to see the cathedral rebuilt within five years.

“The fire at Notre Dame reminds us that our history never stops and we will always have challenges to overcome,” Macron said. “We will rebuild Notre Dame, more beautiful than before – and I want it done in the next five years. We can do it. After the time of testing comes a time of reflection and then of action.”

The fire, which had started at the base of the 93-metre spire at about 6.40pm on Monday, spread through the cathedral’s ribbed roof, made up of hundreds of oak beams, some dating back to the 13th century. These beams, known as la forêt (the forest) because of their density, formed the cross-shaped roof that ran the length of the nave and transept above stone vaults.

As hundreds of tourists and Parisians stood and watched the flames leaping from the roof, there was shock and tears as the cathedral spire caught fire, burned and then collapsed into itself.

The 500 firefighters at the scene then battled to prevent the flames from reaching the two belfry towers, where the cathedral bells hang. If the wooden frame of the towers had caught fire, it could have sent the bells – the largest of which, the Emmanuel Bell, weighs 13 tonnes – crashing down, potentially causing the collapse of both gothic towers.

Police and fire services will spend the next 48 hours assessing the “security and safety” of the 850-year-old structure.

Architects have identified three main holes in the structure, in the locations of the spire, the transept and the vault of the north transept. Most of the wooden roof beams have been burned, and parts of the concrete vaulting holding up the roof have collapsed.

The interior minister, Christophe Castaner, visited the cathedral on Tuesday afternoon to see the extent of the devastation. Ash covered the marble diamond-patterned floor and floated in large pools of grey water from the fire hoses. Behind a heap of blackened oak beams that lay piled up where they had fallen, daylight from vast holes in the cathedral roof lit a golden cross over the Pietà statue by Nicolas Coustou, which appeared untouched.

The Great Organ constructed in the 1730s with about 8,000 pipes was said to have been damaged by water but escaped the flames; initial inspections suggested the three ornate stained glass “rose” windows also appeared to have survived the fire, officials said.Fire officers have said a complete inventory of the damage will not be possible until the cathedral structure has been deemed safe.

The culture minister, Franck Riester, said religious relics saved from the cathedral, including the Crown of Thorns and Saint Louis’s tunic, were being securely held at the Hôtel de Ville, and works of art that sustained smoke damage were being taken to the Louvre where they would be dried out, restored and stored.

Sixteen copper statues that decorated the spire, representing the 12 apostles and four evangelists, had been removed for restoration only a few days before the fire. Relics at the top of the spire are believed lost as the spire was destroyed.

French political commentators noted the devastating fire had succeeded where Macron had failed in uniting the country. Politics was put aside as the president cancelled a statement and press conference giving details of measures emerging from his “great debate” in response to gilets jaunes(yellow vests) protests.

But recriminations over the state of the building and the restoration are likely to intensify over coming days. Leniaud told La Croix newspaper: “This is not about looking for people to blame. The responsibility is collective because this is the most loved monument in the country.”

Alexandre Gady, an art historian, agreed. “We’ve been saying for years that the budget for [maintaining] historic monuments is too low,” Gady told FranceInfo.

The Paris prosecutor’s office has opened an inquiry into “involuntary destruction by fire”, indicating they believe the cause of the blaze was accidental rather than criminal.