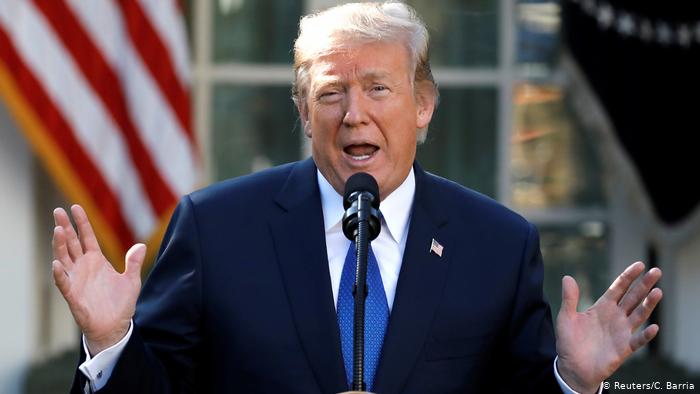 Donald Trump has threatened Cuba with the “full and complete embargo” over its support for Venezuela’s Nicolas Maduro, a shuddering escalation of tensions that called to mind the Cold War, the Independent reported.

On a day that saw violence erupt on the streets of Caracas as opposition leader Juan Guaido launched his latest bid to oust Mr Maduro, Mr Trump took to social media to heap new pressure on the Venezuelan president and his supporters in Havana.

“If Cuban troops and militia do not immediately CEASE military and other operations for the purpose of causing death and destruction to the constitution of Venezuela, a full and complete embargo, together with highest-level sanctions, will be placed on the island of Cuba,” he tweeted. “Hopefully, all Cuban soldiers will promptly and peacefully return to their island.”

Mr Trump’s comments came as Mr Guaido and his supporters gathered to try and oust Mr Maduro, one that ultimately fizzled. In a video posted on social media early on a day Mr Guaido had termed Operation Freedom, the opposition leader was seen outside La Carlota airbase in Caracas, urging supporters and the military to take to the streets.

By his side stood his mentor, Leopoldo Lopez, an opposition politician who had been surprisingly freed from house arrest by a small number of intelligence agents who have turned against Mr Maduro.

“The time is now. We are going to achieve freedom and democracy in Venezuela,” said Mr Guaido, saying he was going to release a list of senior officers who were backing him. “The armed forces have taken the right decision. With the support of the Venezuelan people and the backing of our constitution, they are on the right side of history.”

Protesters swept onto the streets of eastern Caracas and some other cities, where they were confronted by supporters of Mr Maduro, along with troops and police officers.

At one point, armoured vehicles ploughed into anti-government protesters as troops tried to restore order.

Events that took place in the opposition’s stronghold in a wealthier neighbourhood of eastern Caracas, appeared not to have triggered a broader military revolt.

Mr Maduro and senior members of his government denounced Mr Guaido and accused him of being a puppet of Washington.

“Nerves of steel,” tweeted Mr Maduro. “I have spoken with the commanders of all the [regional military units]  the country, who have expressed their total loyalty to the people, to the constitution and to the fatherland. I call for maximum popular mobilisation to ensure the victory of peace.”

“Those who try to take Miraflores with violence will be met with violence,” he said on national television, referring to the presidential palace.

Meanwhile, foreign minister Jorge Arreaza said the “right-wing extremists” would not succeed in fracturing the armed forces, which have largely stood with the socialist leader throughout the months of turmoil.

Mr Maduro has been fighting for his political life since Mr Guaido in January declared himself the country’s legitimate leader. He quickly earned the backing of the US, UK and Canada. Mr Maduro is still recognised by Turkey, China and, crucially, Russia, which has sent troops to Caracas.

Mr Guaido’s actions came after Mr Maduro was sworn in for a second time as president. His election last year came in a ballot intentionally boycotted by much of the opposition and which was not recognised by much of the international community. Some independent observers said they believed the vote was fair.

In Washington, which has a long history of interfering in the domestic politics of Latin America, Mr Trump threatened to impose a new blockade on Cuba, which has long provided military and security trainers to Venezuela, as well as doctors. An embargo on Cuba was fist imposed in 1958, then sharply increased. Relations between the nations underwent a breakthrough after Barack Obama and Raul Castro struck a diplomatic deal in December 2014.

Mr Trump’s national security advisor John Bolton singled out three senior aides to Mr Maduro he said must make good on commitments they purportedly made to the opposition.

“It’s still very important for three figures in the Maduro regime who have been talking to the opposition over these last three months to make good on their commitment to achieve the peaceful transition of power from the Maduro clique to interim president Juan Guaido,” said Mr Bolton.

Secretary of state Mike Pompeo, who admitted working behind the scenes when he was head of the CIA to bring about change in Venezuela, told CNNthe US had expected Mr Maduro to leave on Tuesday, but claimed Moscow had persuaded him to remain. “They had an air plane on the tarmac. He was ready to leave this morning.”

The turmoil on Tuesday exacerbated tensions in a country struggling with power cuts, shortages of food and medicine, and an oil-dependent economy made worse by blanketing US sanctions. More than three million Venezuelans have fled economic hardship and Mr Maduro’s increasingly autocratic rule.

Earlier this month, a report by the Washington-based Centre for Economic and Policy Research suggested up to 40,000 Venezuelans may have died as a result of sanctions first imposed in the summer of 2017. The US state department dismissed the claim.