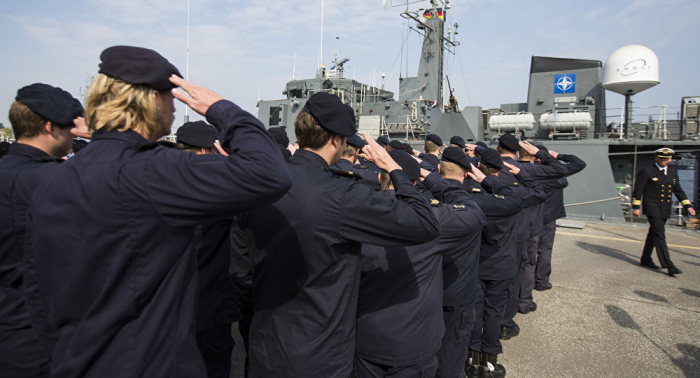 Earlier this week, NATO kicked off its annual Spring Storm drills in Estonia, with 10,000 troops from over a dozen countries involved in the exercises. The alliance is expected to further beef up its regional presence ahead of the upcoming Baltic Protector and BALTOPS naval exercises, set to take place later in May and in June.

A group of NATO warships led by the Danish frigate Tethis and a squadron of minesweepers from the Netherlands, Belgium, Norway, Germany and the UK has made its way into the Baltic Sea, the Intel Sky & Air monitoring resource has reported, citing the ships' transponder data.

According to the Marine Traffic naval monitoring resource, the grouping passed through the Oresund Strait on Wednesday night, with the ships situated near the eastern Danish Island of Bornholm as of 5 am this morning.

Earlier NATO Allied Maritime Command reported that the US Navy's USS Gravely destroyer and the Royal Navy's HMS Westminster frigate, which arrived in the region last month along with Turkish and Spanish warships, had conducted training exercises in the Baltic Sea.

On Wednesday, the Russian military tracked a US Air Force Boeing RC-135V spy plane as it flew near the maritime borders of the Russian exclave of Kaliningrad along the Baltic Sea.

Earlier this week, the Russian military conducted missile drills in the region, with a Baltic Fleet corvette firing off a pair of Uran anti-ship missiles at targets 30 km away.

NATO has demonstrably beefed up its presence in the Baltic region in recent weeks, with France and the UK recently deploying more troops, tanks and helicopters to the Baltics as part of their rotating deployment and for upcoming drills.

Moscow has repeatedly voiced its concerns over the expansion of NATO's forward presence along Russia's borders in the Baltic countries, Poland, and Romania, pointing to the risks of accidental escalation and warning that it would monitor the alliance's military operations in the region.

On Monday, NATO launched its annual Spring Storm drills in Estonia, with 10,000 troops conducting ground and air-based exercises in the country over the next three weeks. These drills will be followed up by Baltic Protector, a series of NATO maritime tactical exercises and shore-landing drills set to kick off later this month involving 3,000 military personnel and about 20 warships. Those drills will themselves be followed up by the so-called BALTOPS drills in mid-June, involving ships from the US Second Fleet and the ships, aircraft and landing forces from over a dozen other nations