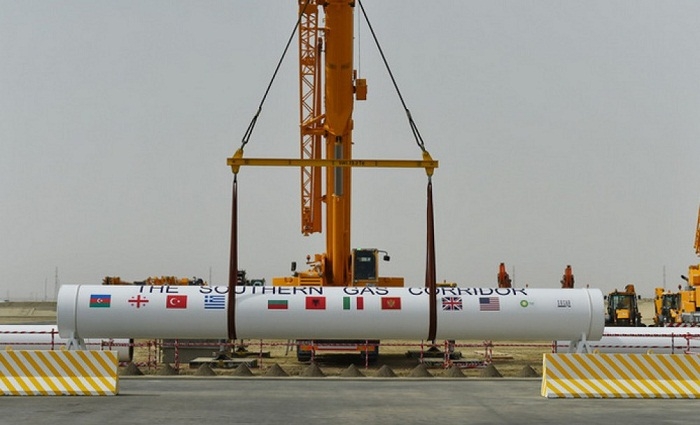 The Southern Gas Corridor is a fantastic huge infrastructure, US Deputy Assistant Secretary of Bureau of European and Eurasian Affairs George Kent told reporters in Baku on May 2, AzVision.az reports.

“We have many opportunities to deepen our relations in the economic side,” he added. “For many years the focus has been on the strategic issues in the energy sector. Some our biggest companies have been here working with Azerbaijani firm SOCAR to help develop oil and gas fields in the Caspian Sea, as well as on the Southern Gas Corridor.”

“The Southern Gas Corridor is a fantastic multi-country huge infrastructure development that brings not only Azerbaijani gas but potentially from Central Asia to the markets in Europe that increases energy security of entire continent, not only Azerbaijan and Georgia,” Kent said. “So we think the project like that is important for the entire continent in energy security. We want to see not only Caucasus being prosperous but all Europe.”

“The projects like Southern Gas Corridor are the examples of projects that help Azerbaijan, help energy security in Europe and also help connect Central Asia with Azerbaijan,” he said.

”I think East-West connections have much more positive prospects, just because of the dynamics of the trade of energy, as well as the trade between China and Europe,” Kent added. “Even a small slice of this trade potentially has great turnover for Azerbaijan.”

The Southern Gas Corridor project envisages the creation of a pipeline infrastructure for the transportation of Azerbaijani gas, which is extracted as part of the development of the Shah Deniz Stage 2 field, to Europe via Turkey.

The main components of the project are Shah Deniz Stage 2, expansion of the South Caucasus pipeline Baku-Georgia-border with Turkey, construction of the Trans-Anatolian Natural Gas Pipeline (TANAP) from Turkey’s eastern border to the western border and the Trans-Adriatic Pipeline (TAP) connecting Greece, Albania and the Adriatic Sea in southern Italy.


More about: Azerbaijan   US