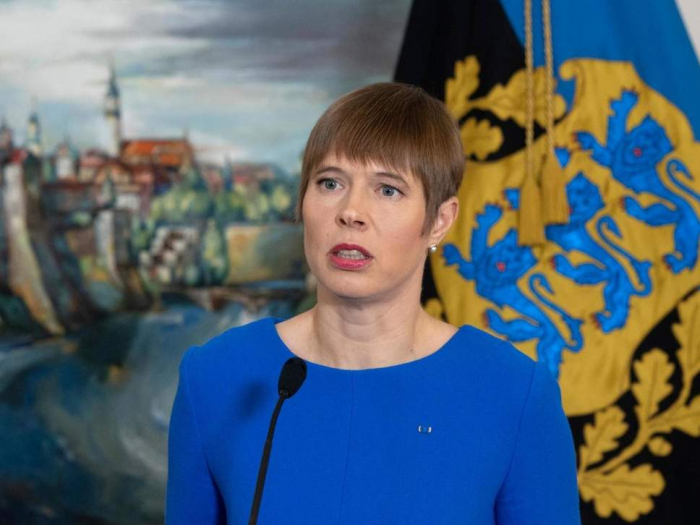 Estonia’s first female president has been called an “emotionally heated woman” after she walked away from the swearing-in of a cabinet minister accused of domestic violence, the Independent reported.

Marti Kuusik, who has been accused of domestic violence, was sworn in as technology and foreign trade minister shortly after the weekly investigative newspaper Eesti Ekspress made the allegations against him.

As he was about to take the oath of office Ms Kaljulaid left him to salute an empty chair.

“An emotionally fired-up woman can allow herself that,” Mr Helme told reporters. “But Kersti Kaljulaid isn’t just a woman, but rather the president of the republic. She reads one article, is so emotionally upset as a woman that she immediately passes judgement on the fly.”

Police opened an investigation to review the allegations hours after they surfaced. Mr Kuusik resigned the day but said the accusations were “slanderous”.

“Let me again confirm that the accusations made against me are slander – I am not someone who engages in violence,” he said in a statement. “As of now, the decision of the prosecutor’s office to start criminal proceedings against me has been added to the terrifying media attack launched against me in recent days. In a situation like this it is not possible for me to carry out my work as minister. Furthermore, the rest of the government is not able to work normally.”

Ms Kaljulaid, who has been president since October 2016, has yet to respond to Mr Helme’s controversial comments. The leader, who returned to her seat when it was the next minister’s turn, attended the cabinet ceremony wearing a top with “Sona on vaba” printed on it, which means “Speech is free”.

Mr Helme called reporting on the allegations “an unconstitutional witch hunt” and accused news outlets of applying a double standard in covering abuse allegations against the former minister from his own party.

But prime minister Juri Ratas, leader of the Estonian Centre Party and the country’s new coalition government, said Ms Kaljulaid was free to do as she wanted.

“How the president wanted to act during the swearing-in of the government is her right,” he said, adding that, after being briefed by the Estonian police and prosecutor’s office, he was sure the former minister’s resignation was the right call.

Mr Helme has faced criticism on Twitter for his comments.

Estonia’s new coalition government provoked international concern after two of its new cabinet ministers made an alleged white power salute at the swearing-in ceremony this week.

Former Estonian president Toomas Hendrik Ilves tweeted photos of what he described as a “white power sign” given by ministers.

Mr Helme and his son Martin, both from the far-right EKRE party, were pictured making the hand gesture – which has gained popularity online.

The origins of the alleged white supremacist symbol, which resembles the “OK” sign, lie in the online American “alt-right” movement. Earlier this year the suspect of the Christchurch mosque shootings made the gesture in court and organisations such as the Anti-Defamation League have linked it to a campaign by members of the anonymous online message board 4chan.

The new government, which took office earlier this week, is led by the liberal Estonian Centre Party. However, under a coalition deal done by the centrists, the EKRE has been given five cabinet ministers in exchange for their support.

EKRE entered Estonia’s parliament in 2015. It emerged from elections on 3 March with 17.8 per cent of the vote to become the third-largest party in the national legislature.

Mr Helme and his son, who is the newly appointed finance minister, have previously accused local media of showing a negative bias towards their party.

While Estonia, which joined the EU in 2004, enjoys strong economic growth and low unemployment, regional differences in the country of 1.3 million people are vast.