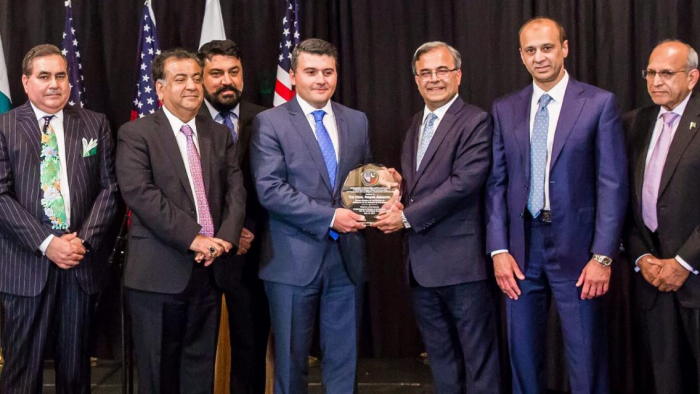 The Council of Pakistan, one of the most influential organizations of the Pakistani community in the United States, awarded Azerbaijan’s Consul General in Los Angeles Nasimi Aghayev with its highest award, Consulate General of the Republic of Azerbaijan in Los Angeles told reporters.

The award was presented by the Ambassador of Pakistan to the United States Dr. Asad Majeed Khan at a ceremony held in Los Angeles. Council of Pakistan announced that it was presenting the award to Consul General Aghayev in recognition of his “outstanding and exemplary service in fostering dialogue, mutual understanding  and cooperation among religions, communities and cultures”.

The event was attended by faith and community leaders, elected officials, mayors and councilmembers of various cities and other guests.

Speaking at the event, Consul General Aghayev expressed his gratitude for the award. He mentioned the historically strong relations of friendship and brotherhood between the people of Azerbaijan and Pakistan. The Consul General highlighted that both people supported each other in their most difficult times, and that this brotherhood plays today an important role in fostering a robust partnership between the two countries in many different fields.

The Consulate General of Azerbaijan has had a strong cooperation with the Pakistani community as well as with other faith and ethnic communities in Los Angeles in order to strengthen the sorely needed intercultural and interfaith dialogue here, and to educate the local communities about Azerbaijan’s working model of multiculturalism and interfaith harmony.