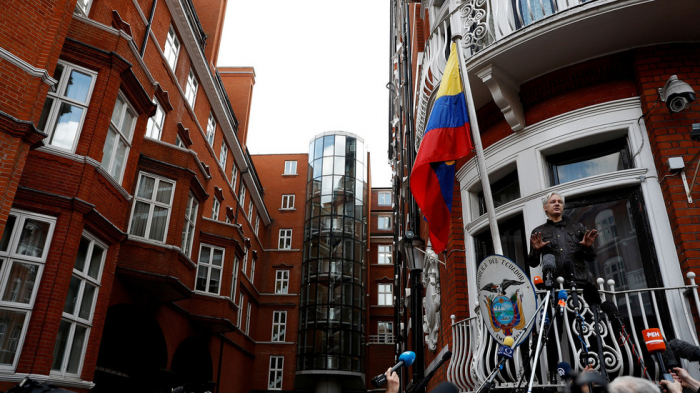 Ecuador's attorney general has informed Julian Assange's lawyer that the WikiLeaks co-founder's files, computer, mobile phones and other electronic devices will be seized during a search of the London embassy and sent to the US.

WikiLeaks editor-in-chief Kristinn Hrafnsson tried unsuccessfully to retrieve Assange's personal belongings from Ecuador's UK embassy, where he had been holed up for almost seven years before his arrest and incarceration last month. However, the Ecuadorian government has reportedly greenlighted a US request to provide it with access to the documents and electronic devices left behind by the jailed WikiLeaks editor after he was hauled out of the embassy by the British police on April 11.

The searches are set to be conducted by police on May 20, El Pais reported, citing a notice sent to Assange's Ecuadorian lawyer Carlos Poveda.

Personal files, Assange's computer, mobile phones, memory sticks, CDs and any other electronic devices uncovered during the searches will then be seized and sent to the US as a part of Ecuador's response to the Department of Justice's judicial request. The US is currently building a case to extradite Assange on hacking charges.

The files contain troves of sensitive information, include communication with lawyers and other legal documents – which, the lawyers argue, deprive him of the right to a proper defense. Having this data will potentially allow the US to "build and create new charges" to extradite Assange in violation of Ecuador's own asylum policies.

News of the looming handover came as a bolt out of the blue for Assange's defense team, Poveda told RT Spanish, adding that it's impossible to be sure that his things in the embassy haven't been tampered with already.

"Since Mr Assange left the embassy, we cannot know for sure what has been happening inside these rooms," he said. Lawyers have requested CCTV records for the period since Assange's arrest, Poveda said.

The US has until June 12 to build a case for extradition. Last week, Assange, who has been serving a 50-week sentence in a maximum-security Guantanamo Bay-style prison for skipping bail, faced an extradition judge for the first time. The WikiLeaks co-founder said he would not surrender himself to extradition for simply "doing journalism" that has earned his site many international awards.