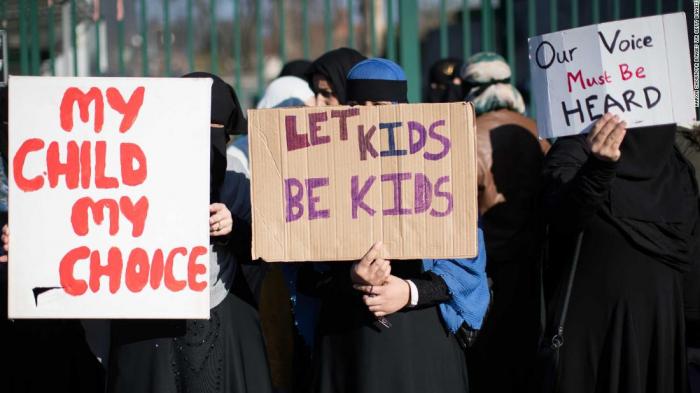 Two male penguins are struggling to have a baby. They sit on a rock for weeks, thinking it is an egg. A zookeeper, who feels sorry for them, gives them a real egg instead -- which hatches.

"And Tango Makes Three" is a true story about male penguins who adopt an egg and raise a chick together at New York's Central Park Zoo. It is one of the many children's books about equality and diversity dotted around the classrooms in the red-bricked Anderton Park Primary School in the UK's second city Birmingham.

The book, along with other titles including "My Princess Boy" and "We Are Family," is part of a curriculum that teaches students between the ages of six and 11 about the human rights and characteristics legally protected from discrimination by the UK'S 2010 Equality Act. These cover race, religion, gender reassignment and sexual orientation.

But the curriculum at Anderton Park and several other schools in Birmingham has sparked months of confrontations between teachers and mainly Muslim parents who believe it is inappropriate for primary schools to be teaching their kids about things like LGBTQ rights or same-sex relationships.

Since March, angry demonstrators -- sometimes in their hundreds -- have gathered outside Anderton Park, where the majority of students are Muslim, to protest. Students have sometimes been pulled out of class for a day and teachers say they have been harassed at the school gates and online. 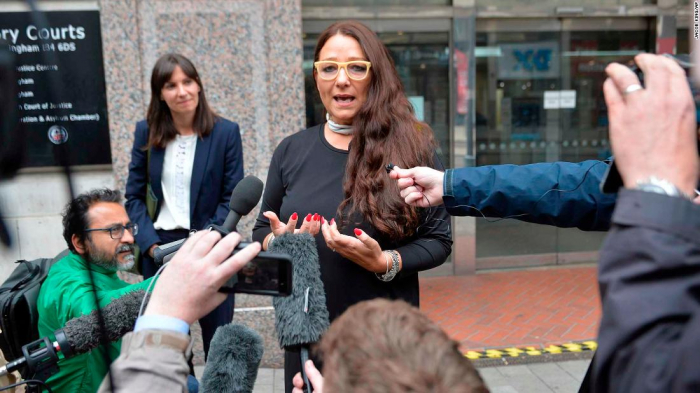 The school's headteacher, Sarah Hewitt-Clarkson, said she has had sleepless nights over the protests.

The protesters represent a blend of parents and concerned members of the community. Amir Ahmed became one of its leaders, despite not having a child at Anderton Park, because he said he was worried about what children in his community were being taught. He told CNN there was "an agenda and a concerted effort to change the attitude and beliefs of children on sexuality away from our traditional values."

The school's headteacher, Sarah Hewitt-Clarkson, has been defiant in the face of the protests.

"There are many things that can be the glue that holds the math and English and history and geography music lessons together -- and in this school, it's our ethos of equality," she said of the importance of teaching about LGBTQ relationships.

Referring to a sign brandished during one protest, she told CNN: "If you say 'Adam and Eve, not Adam and Steve,' that is homophobic."

In a "frequently asked questions" section posted on its website after the initial March protest, Anderton Park wrote: "We are not promoting LGBT, just like we're not promoting being Christian, being black, being disabled or any other part of the Equality Act. We promote understanding about everyone. We are showing children that there are different kinds of people around us and we respect everyone, no matter what background you are from or they are from."

By May, the hostilities had escalated to the point that the school had to close early for a mid-term break. Last month, a judge said, "I find it likely the claimant (Birmingham City Council) will establish at trial some of the protestings has gone beyond lawful limits and strayed into harassing, alarming or distressing conduct, through its persistence, timing and context," the Press Association reported.

The judge imposed a temporary exclusion zone around the school until a trial over whether the protests can be resumed outside the school takes place in July.

But the debate has raged over what can be taught to children in the classroom -- and whether the beliefs of some minorities, who see homosexuality as morally wrong -- can supersede the need to teach basic human rights in a modern liberal democracy.

The protests at Anderton Park began after the nephew of Shakeel Afsar, 32, brought home a copy of "My Princess Boy."

Buoyed by the success of demonstrations he led against a program at another school, Ahmed decided to help Afsar and his sister Rosina -- the two other lead protesters outside Anderton Park. Ahmed denies being homophobic, and says the lessons are forcing parents to have uncomfortable conversations with their children about issues that contradict their religion.

Outside the school, an Anderton Park parent who declined to provide her name said she supported the protests. "Children should not be learning these things at such a young age," the woman told.

Misinformation has become a hallmark of the protests. Leaflets were passed out containing "sexually explicit material" that was falsely alleged to have been taught in the school, said local gay rights activist Khakan Qureshi, who has attempted to engage with the protesters. 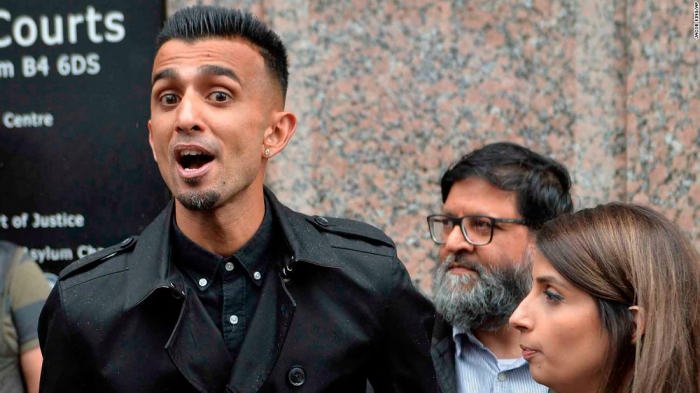 The injunction banned Amir Ahmed (2nd from right), one of the protest leaders, from entering the exclusion zone around the school.

Hewitt-Clarkson debunked some of the leaflet's claims in a letter sent to parents in March. "The leaflet states 'This programme promotes a whole-school gay ethos.' NO. This is not true. We do not have a programme and we never have," the letter said.

Amir Ahmed agreed that a "gentleman" had been sharing false information at one of the protests but denied supporting claims that Anderton Park was teaching the material outlined in the leaflet.

The situation has taken its toll on parents and teachers alike. Hewitt-Clarkson told CNN that one of the protesters called her a pedophile while making a speech through a megaphone.

"Parents said to me, 'there are crazy people out there and what is there to stop them from throwing a brick through a window?'" Hewitt-Clarkson said. "How has this amount of hatred [come to] the pavements outside of my school [from] a few people seeking to drive wedges between the school, its parents and the community?"

She has found solace in the outpouring of support of the public. Behind her desk, a box is filled with cards from well-wishers, thanking her for making a stand.

Hewitt-Clarkson stresses that only 0.5% of Anderton Park's annual timetable is dedicated to teaching about equality, which the school describes as "breaking stereotypes" and ensuring "everyone is valued, feels safe, secure and happy." It is relayed through one lesson at the end of each term, she said, and books that go beyond the traditional tales of "male heroes and female princesses." Classrooms have also been renamed after a diverse range of activists.

"There's nothing new here. It is about weaving it into everything you say and do, and having said that, that means we don't talk about it all the time, obviously -- when we are dividing fractions, we don't necessarily talk about males and females being equal," she said with a laugh.

The protests in Birmingham are a microcosm of what could soon turn into a country-wide problem. In February, the government outlined new guidelines that will make relationship classes mandatory for state-funded primary schools (for children aged 5-11) in England, and sex and relationship classes compulsory at secondary level (ages 11-16) from September 2020.

Zanele Muholi captures powerful portraits of South Africa's LGBTQ community
"We want the subjects to put in place the key building blocks of healthy, respectful relationships, focusing on family and friendships, in all contexts, including online," the government wrote in a set of draft guidelines.

At the primary level, the guidance states that students will be taught about all different types of families, including "single parent families, LGBT parents, families headed by grandparents" and adoptive parents.

While schools are "free to determine" what their new policy will look like, "students' religious background" should be taken into account, and schools should decide when it would be age-appropriate to teach "their pupils about LGBT(Q)."

A "frequently asked questions" document, also published by the government, added that there was no specific requirement to cover LGBTQ content at primary schools.

Teachers believe the act is ambiguous, leaving them with the responsibility of deciding whether the religious makeup of their students supersedes other protected characteristics of the Equality Act.
The issue has also saddled them with the responsibility of figuring out what is age-appropriate, Colin Diamond, professor of educational leadership at the University of Birmingham, told CNN.

"It's a recipe for chaos, because the government has left loopholes in the regulations to allow children to be withdrawn in certain situations... they're exposing all the headteachers, particularly in primary schools, in England, to potentially a lot of protests and a lot of wasted time and energy," he added. 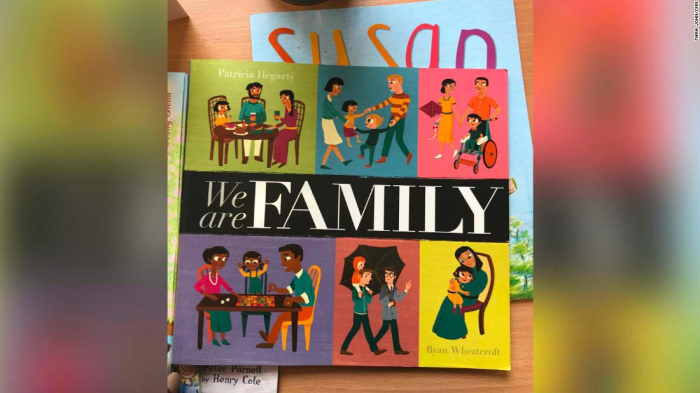 The school's headmistress has been holding workshops to demystify equalities teaching to parents.

Other faith groups watch from the sidelines

While government policy is in step with most of the more socially liberal British public, the lack of clarity has created "a policy vacuum that will be exploited" by socially conservative groups, Diamond added. "It is a great shame because the intention of the policy is good."

Other faith groups have been watching from the sidelines. The conservative evangelical lobby group Christian Concern, which has been criticized for its anti-LGBTQ and anti-abortion agenda, said while "not directly involved in the Birmingham protests" it considers the upcoming legislation "Orwellian."

Roger Kiska, who works at the Christian Legal Centre, which is linked to Christian Concern, said he was actively looking "for any legal challenges, because we feel that the provisional opt-out for sex education is not in accordance with the government's obligations under the Human Rights Act."

The push for more parental control over school lessons has found some official support from lawmakers. Elaina Cohen, parliamentary adviser to Khalid Mahmood, the Member of Parliament for Birmingham Perry Barr, told CNN that she would write to the education select committee asking them to scrutinize how the policy will be rolled out and developed.

"The only discrimination in the classroom at the moment is against parents of faith, who said that their children are being force-fed something contrary to their faith," Cohen said.

Education minister Nick Gibb said he would press ahead with the new statutory instrument. telling the Press Association that it was "unlikely that we will bring those extreme ends of the debate into that consensus."

Boris Johnson, the frontrunner to become the next prime minister, told the Birmingham Mail that he backed the Anderton Park teachers.

Jess Philips, another MP for Birmingham, confronted protesters outside the school in May. In a heated exchange with Shakeel Afsar filmed by the BBC, she told him that the demonstrations were "damaging the reputation of a peaceful and loving community that I have lived in my entire life."

While the most recent temporary injunction against protests at Anderton Park has cut them down in size, Ahmed said he would fight for it to be lifted during a court hearing at the end of July.

Even if that fails, he said momentum to "fight for parents' rights" has spread to other cities. He says he has been in touch with Muslim parents in Manchester, Bradford, and London who are eager to challenge the new guidelines.

Hewitt-Clarkson believes more conversations will bridge the divide. Through workshops and meetings, she says she has been working to defuse the concerns of some parents at her school.
When asked why she is refusing to back down, Hewitt-Clarkson pointed to a quote she has pasted on the wall of her poster-strewn office.

"Help your children become human. Your efforts must never produce learned monsters, skilled psychopaths or educated Eichmanns. Reading, writing, and arithmetic are important only if they serve to make our children more human," the quote reads, which is an excerpt from a letter from a Nazi concentration camp survivor.