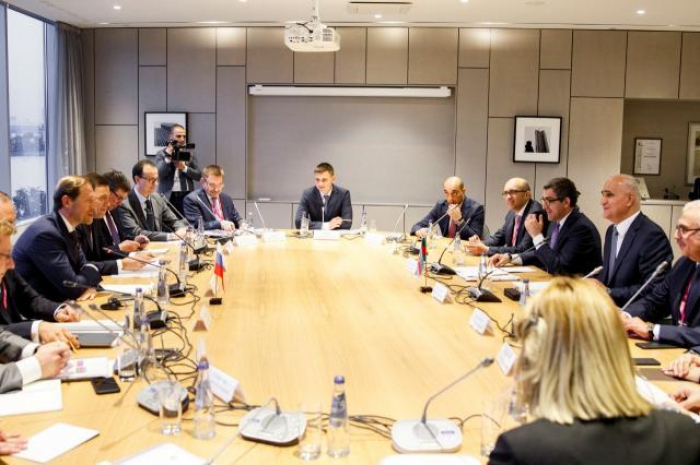 In January-March 2019, the Russian-Azerbaijani trade increased by 10 percent compared to last year and amounted to $561 million, Russian Minister of Industry and Trade Denis Manturov said during a meeting with his Azerbaijani Minister of Economy Shahin Mustafayev at the International Industrial Trade Fair INNOPROM-2019 in Yekaterinburg city, the Russian media reports.

Governor of the Sverdlovsk region Yevgeniy Kuyvashev said that last year, mutual trade between Azerbaijan and the region reached $95 million, which is almost two times higher than in 2017.

In his turn, Shahin Mustafayev underlined the importance the exhibition for developing regional cooperation. In his words, only joint efforts may bring high results.

During the meeting, a number of documents were signed including a contract between Azerbaijan's Ganja Automobile Plant and KAMAZ International Trade Company for the supply of machine sets; memorandums of understanding between ATEF Group of Companies and Russia's Sinara Group, as well as between Azerbaijan Export and Investment Promotion Foundation (AZPROMO) and Gazprombank.

The tenth International Industrial Trade Fair INNOPROM-2019 is held in Yekaterinburg (Russia) on July 8-11. The anniversary forum brings together representatives from 80 countries including, among others, France, Kazakhstan, Austria and Taiwan. The exhibition partner country is Turkey.