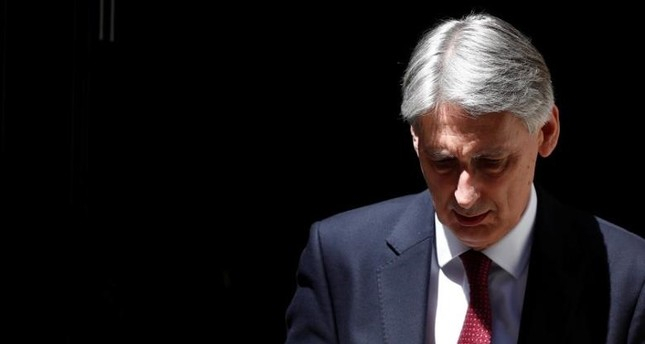 Britain's finance minister Philip Hammond said on Sunday he would resign on Wednesday before his expected sacking by the favorite to become Britain's next prime minister, Boris Johnson, takes office.

"I am sure I am not going to be sacked because I am going to resign before we get to that point," Hammond told the BBC's Andrew Marr Show.

"Assuming that Boris Johnson becomes prime minister, I understand that his conditions for serving in his government would include accepting a no-deal (EU) exit on the 31st of October. That is not something I could ever sign up to."

Johnson is widely expected to win the governing, centre-right Conservative Party's leadership contest on Tuesday and be named as prime minister once Theresa May resigns the premiership on Wednesday.

Hammond has become an increasingly fierce critic of Johnson's Brexit strategy — leaving the European Union with or without a deal on October 31 — and would never have expected to remain as chancellor of the Exchequer in a Johnson government.

But the fact that the second-most senior figure in the government is making a point of resigning rather than wait to be moved on in the incoming prime minister's reshuffle is a significant gesture — and an indicator of the opposition Johnson could face in pursuing his Brexit strategy.

"It's very important that the prime minister is able to have a chancellor who is closely aligned with him in terms of policy, and I therefore intend to resign to Theresa May before she goes to the palace to tender her own resignation on Wednesday."

May will head to Buckingham Palace in London on Wednesday to see Queen Elizabeth II, the head of state, and relinquish her office.

Johnson's rival for the premiership is Foreign Secretary Jeremy Hunt, who has said that Britain should prepare for a no-deal Brexit if a deal seems unlikely by the end of September.

Hunt would be prepared to delay Britain's departure date if a deal seemed within reach but is also prepared to take Britain out of the EU without a divorce deal.

Hunt has not said who he wants running the Treasury should he win the leadership contest.