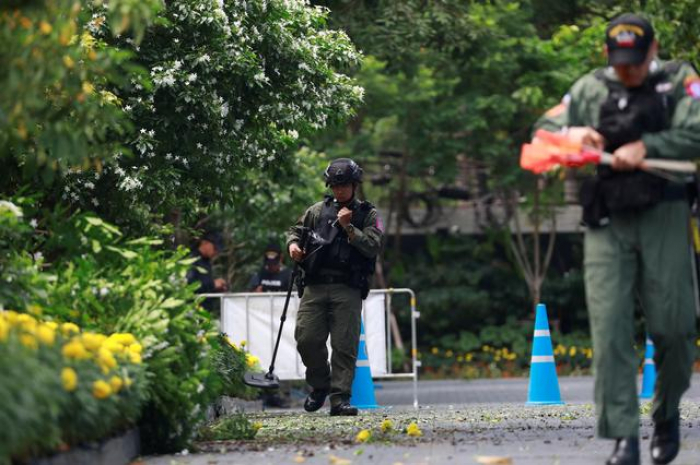 Three small explosions, one possibly a homemade bomb, injured three people in Bangkok on Friday, as the Thai capital hosted a Southeast Asian security meeting with top diplomats from the United States, China and other world powers.

The first explosions were heard just before 9 a.m. (0200 GMT) at two sites near central Bangkok. A third blast was heard shortly afterwards at a government complex hosting several ministries on the northern side of the city.

Police said two street cleaners had been hurt by what appeared to be a homemade bomb in the Suan Luang district.

Local news websites showed pictures of them - one sitting on the ground with medics and the other being taken into an ambulance. Neither appeared to have major wounds.

Eyewitnesses said a security guard had also been hurt close to the 77-storey King Power Mahanakhon building. The area was partly cordoned off as police searched the area.

“The situation is being closely monitored and security measures have been tightened. The public is urged not to panic,” he said.

Bangkok is currently hosting a regional security meeting of foreign ministers from the Association of Southeast Asian Nations (ASEAN) and their counterparts from world powers including the United States, China and Russia.

None of the blasts on Friday were in the immediate area of the meeting venue.

On Thursday, Thai police said they had found two fake bombs near the venue of the regional security meeting. The packages prompted a brief security scare but were quickly deemed harmless. It was unclear whether the meeting was the target.

Police said two men had been arrested in connection with the fake bombs.

China’s top diplomat Wang Yi and U.S. Secretary of State Mike Pompeo are attending the forum along with other regional and global officials.