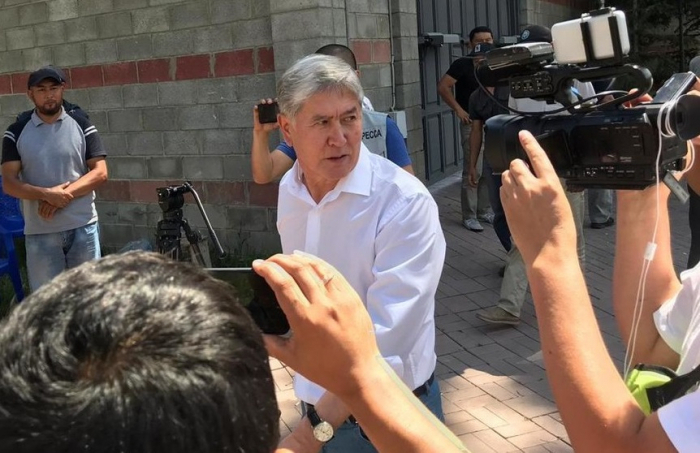 Special forces in the Central Asian nation of Kyrgyzstan on Wednesday raided the residence of the former president, who faces corruption and abuse of office charges, in an operation that injured about a dozen people, officials said.

As midnight (1800 GMT) neared, reinforcements were reported coming to the village of Koi-Tash, about 20 kilometers (12 miles) south of the capital Bishkek, to intensify efforts to take Almazbek Atambayev into custody. Hundreds of Atambayev supporters had gathered near the residential compound, trying to obstruct the raiding forces.

The national security committee denied reports that the supporters had seized some of the forces when the first raid failed.

The health ministry said at least 10 people were taken to hospitals with injuries from the clash and that a special forces member had been shot from inside the residence.

Local news reports said some people were wounded by weapons fired in the raid, including a journalist. The state security committee said only plastic bullets were fired.

Kyrgyzstan’s parliament in June rescinded the immunity that Atambayev had been accorded as a former president, opening him to potential prosecution. Since then, supporters have kept watch outside his residence, expecting an attempt to arrest him.

He is accused of a range of crimes, including corruption and the expropriation of property.

Atambayev, who was in office from 2011 to 2017, says the charges have been concocted by President Sooronbai Jeenbekov, who was once his protégé.

The raid raises concerns about political stability in Kyrgyzstan, which borders China and hosts a Russian military air base.

Atambayev met with Russian President Vladimir Putin in July, suggesting that he enjoys Kremlin support. But Putin later said Russia was committed to working with Jeenbekov.

Kyrgyzstan, once hailed as an “island of democracy” in post-Soviet Central Asia, has repeatedly been shaken by political upheavals. Its first two presidents after independence were both driven from office by riots.