Italy to decide on government future after Salvini pullout 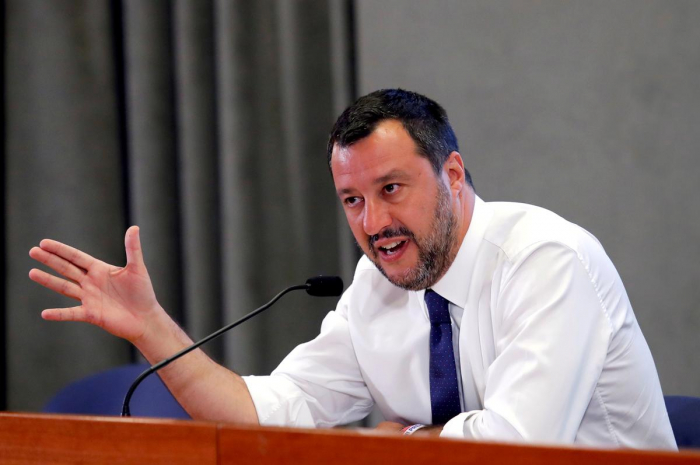 Italian senators are on Monday to take an initial decision on the future of Prime Minister Giuseppe Conte's government after far-right leader Matteo Salvini plunged the country into turmoil by pulling out of the teetering coalition, AzVision.az reported citing AFP.

Interior Minister Salvini called last week for swift elections after withdrawing the support of his anti-immigration League party from an increasingly acrimonious alliance with the anti-establishment Five Star Movement (M5S).

While the government still remains in place, the Senate must decide whether to initiate a confidence vote in Conte's 14-month-old administration.

The heads of political groupings in the upper house are to meet from 1400 GMT Monday. If they agree to back a no-confidence vote they will then decide on a date.

M5S leader Luigi Di Maio and Salvini will first rally their respective lawmakers, with Salvini hoping for a no-confidence vote by August 20 with elections to follow.

A national vote could come at the end of October to capitalise on opinion polls suggesting the League might get 36-38 percent of votes.

But if the Senate party heads cannot agree, the decision will go to a full Senate vote, which the League is not sure to win as it has only 58 of the 315 elected members.

Salvini has also warned that the League's seven ministers could resign and bring down the government.

Populist leader Salvini effectively ended the ruling alliance on Thursday, saying afterwards he had had enough of working with the M5S and what he said was its refusal to collaborate on key issues.

The two parties have seen a stunning reversal of fortunes since forming a government after the M5S won 32 percent of votes and the League 18 percent in 2018.

Salvini has been taking his message to the beaches at the height of the summer holiday season, seeking to build on the League's strong showing in May's European Parliament elections when it won 34 percent of the vote, twice that of the M5S.

But Salvini would still need parliamentary allies to form a government, saying on Monday that he would "in the coming hours" meet former premier Silvio Berlusconi and the head of the extreme-right Brothers of Italy, Giorgia Meloni, to "propose an electoral pact".

Tycoon Berlusconi's Forza Italia party and Brothers of Italy could each get 6-8 percent of votes in an election, according to opinion polls.

Salvini has been relentlessly campaigning in southern Italy, the M5S's traditional heartland and far from the League's historic political base in the north.

The social media-loving Salvini, who is also deputy prime minister, has been burnishing his macho-populist image through a series of beach selfies in recent days.

Some voters in the south have been protesting against Salvini, recalling his past diatribes against southern Italians whom he accused of sponging from the state.

Salvini says he wants an election in order to form a stable, five-year government without the constant bickering with M5S, which is politically distant from the League's hardline anti-immigration stance.

He says he wants to implement radical tax cuts and initiate public works projects to kickstart the Italian economy.

But the M5S is among those opposed to swift elections, with Di Maio calling for parliament first to implement a planned parliamentary reform which would slash the number of lawmakers from 950 to 605.

The M5S's founder, comedian Beppe Grillo, called for a "republican front" to prevent "the barbarians" forming a government.

Former centre-left premier Enrico Letta warned on Sunday that Salvini "has no principles."

Letta's successor Matteo Renzi, who governed for the Democratic Party (PD) from 2014-16, called for the formation of a technocrat government to avoid "giving the extreme right our children's future".

The M5S, PD and other parties should support an "institutional government" to pass the parliamentary reform and next year's budget to avoid an automatic rise in VAT which would hit the least well-off the hardest, Renzi said.

Salvini hit out at "dodgy deals" and "palace politics". "I'm called a dictator but a dictator doesn't ask for elections," he said in Sicily.