Johnson and Macron to hold ‘frank’ Brexit talks in Paris 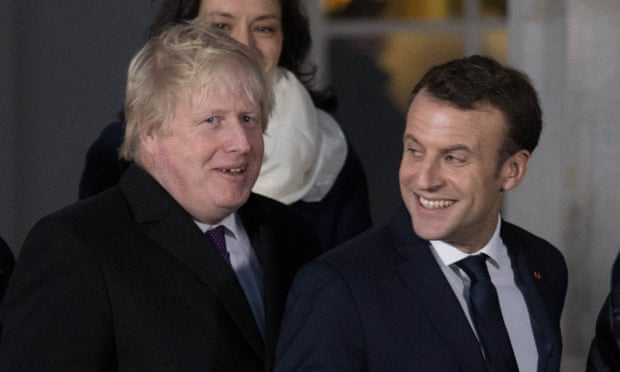 Emmanuel Macron will hold a friendly but “frank” working lunch with Boris Johnson on Thursday after dismissing his request to renegotiate the Brexit withdrawal agreement and scrap the Irish backstop as “not an option”.

The French president told reporters on Wednesday night that there was a “British democratic crisis” over Brexit and he was seeking “clarification” from Johnson on his proposals as the 31 October exit date approaches.

Macron said it was not possible to agree to Johnson’s demand to scrap the Irish backstop which had been negotiated by Britain during two years of talks. Doing so would give the EU an unacceptable choice between protecting its internal market or preserving peace in Ireland.

Macron said protecting the Northern Irish peace process was crucial. “We have to help the British deal with this internal democratic crisis but we mustn’t be held hostage to it nor export it.”

France believes a no-deal exit is now the most likely scenario, an official in Macron’s office said.

The EU member states have a united front and there was not a “cigarette paper” standing between the positions of France, Germany and others EU members, the French official added.

Much of the meeting will centre on preparations for the G7 summit in Biarritz this weekend, Johnson’s first appearance on the international stage since he became prime minister last month.

As well as setting out their respective red lines on Brexit, they will also discuss Syria, Yemen and Russia, and Paris and London’s close links on international defence and security.

On Brexit, some French political observers fear Johnson is setting up a confrontation with the EU that will allow him to reap domestic political capital from what he will cast as EU intransigence, singling out France for blame if the UK leaves without a deal.

But Macron firmly rebutted that ahead of the lunch, saying the EU had negotiated with Britain for two years and a no-deal would be the “responsibility of the British government” and “Britain’s doing, always”.

Johnson began pinpointing France as a problem long before he became PM. While being filmed for a documentary last year when he was foreign secretary, he said of France: “Why are they trying to shaft us?” He called France “naughty children” on the issue of Europe. He later denied he had called the French “turds” over Brexit.

Johnson is well known in Paris for what the local media call his “French-bashing” for a domestic audience, notably as London mayor when he said his city’s bike scheme was a Rolls-Royce to Paris’s Citroën 2CV. He said the Socialist government at the time, with its proposed high tax rate on the very rich, had been “captured by sans-culottes” running a “tyranny” of the like not seen since the French Revolution.

“To be popular in the UK, do you always have to criticise the French?” one French interviewer asked him as mayor. “No, not at all,” he replied, saying he loved France.

Johnson is fluent enough in French that as mayor he gave several TV and radio interviews in the language. In one French TV news interview in 2013 he was asked whether the UK should hold a referendum and leave the EU. He replied: “I would vote to stay in.”

Johnson speaks what he calls a “barbarian form of French”, learned at school in Brussels. “They love it when I speak French,” he told a British diplomat on camera on a trip to Paris as foreign secretary. Macron speaks better English than Johnson’s French; both men are keen on the classics and often use Latin phrases when speaking in public.

French officials stress that Johnson and Macron have a good working relationship. They last met at Sandhurst last year at an Anglo-French summit, where Johnson proposed building a 22-mile bridge across the Channel to France. Macron reportedly replied “let’s do it” and the two posed with thumbs up.

The pair last spoke by phone in July and French commentators were surprised that Johnson did not take up Macron’s invitation to meet sooner after taking office.

Macron said a no-deal Brexit is not his preferred outcome but France has prepared for one, including drawing up special legislation on ports and customs.

“It appears to be in Johnson’s interest to say that a no-deal exit would be the responsibility of the Europeans, and the French in particular, for not accepting his conditions,” said Christian Lequesne, a professor at Sciences Po in Paris. “But on the French side, Macron’s line will be to say a no-deal exit is nothing to do with the Europeans, who have done everything to try to have an arrangement.

“Of course, there will be a war of interpretation. And when that happens, old cliches emerge – that the UK has blocked Europe or that the French are intransigent.”

Parts of the British media have previously likened Macron to Charles de Gaulle for standing firm on the length of any extension on the UK’s departure. Lequesne said: “In England, the present can’t be interpreted without immediately searching for parallels with history.”