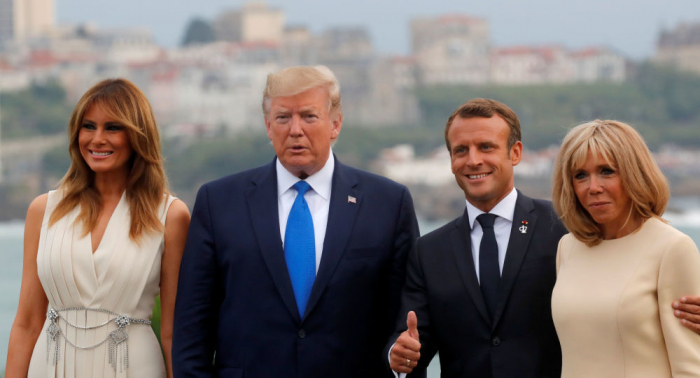 US President Donald Trump said that Russian President Vladimir Putin might attend the next G7 summit in the United States in 2020, TASS reports.

The US president made this statement ahead of his meeting with UK Prime Minister Boris Johnson on the sidelines of the G7 summit that is running in the French resort city of Biarritz, the news agency said.

According to Bloomberg, Trump said it is "certainly possible" that Putin is invited to the next G7 summit.

Meanwhile, the news agency Reuters reported that the US president confirmed the media reports that the G7 leaders had discussed Russia’s possible return to the club of the world’s leading industrialized nations. Trump noted, however, he did not know whether Russia would finally return to the Group of Seven nations.

US President Donald Trump's friendship with his French counterpart Emmanuel Macron proved to be indeed special after the two heads of state held an impromptu lunch ahead of the G7 summit in Biarritz, France this week. Not everyone in the US administration was, however, happy about Macron's déjeuner invitation, multiple reports suggest.

Senior aides to Donald Trump have privately accused the G7 summit host and French president, Emmanuel Macron, of trying to antagonise the United States and isolate POTUS by focusing on "niche issues", such as climate change, The New York Timesreported.

Just hours after slamming the French president for "foolishness" over a decision to impose taxes on US digital companies operating in France and warning of tariffs on French wine imports, Trump lavished praise on what he called a "very good relationship" with Macron.

The two presidents met for a last-minute lunch ahead of the summit, held in the French city of Biarritz on 24-26 August, on an oceanfront terrace at the Hotel du Palais that White House aides reportedly didn't have any idea about - something which allegedly sparked controversy among Trump's entourage.

The New York Times reported that senior administration officials were convinced that Macron sought to "play his domestic audience" by pushing for climate change, income and gender equality, amid continued Yellow Vests protests in the country. The American side purportedly expected France to focus more on national security and a potential recession.

According to the NYT, some of Trump's aides have voiced concerns that Trump was "hurting" the economy and was doing "lasting damage to his own prospects for re-election".

Bloomberg, meanwhile, cited unnamed US officials as saying that the French side was trying to embarrass POTUS on climate change, an issue which Trump, who had pulled the US out of the 2015 Paris climate accord, once described as a "hoax".

"It's our view that with France trying to drive these other issues outside of global economics, national security and trade, they're trying to fracture the G7", an anonymous administration official told White House reporter for POLITICO Gabby Orr.

President Trump took to Twitter on Sunday to hit back at "the Fake and Disgusting News" over claims that relations between participants of the G7 summit were tense and insisted that they all were "getting along very well".

The annual G7 summit started the day before in Biarritz, France with the seven leaders of the member states discussing important international economic and financial issues.

The G7 summit in Biarritz, France slated to last until August 26 has set the issue of inequality and the advancement of universal access to social welfare as its main priority despite a new escalation in the trade war between the US and China.

At the same time, the summit has been met by huge ways of protests in several parts of France with organisers stating that the rallies are meant to attract attention to the contribution of the G7 member states to growing inequality and to underscore the difference between the leaders' promises and their actions.