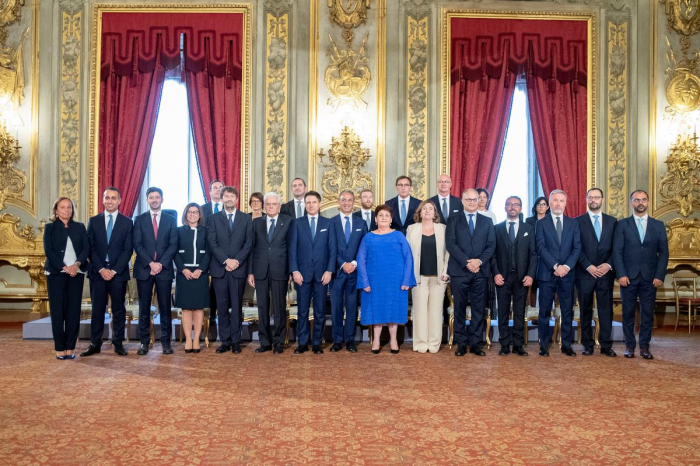 A new Italian government was sworn into office on Thursday, with the pro-European Democratic Party (PD) flanking the anti-establishment 5-Star Movement in an unlikely alliance that has been cheered on by financial markets, AzVision.az reported citing Reuters.

The administration looks certain to seek a much less conflictual relationship with the European Union than the previous coalition comprising 5-Star and the far-right League, which constantly railed against EU budget and migration rules.

The PD has taken charge of the economy ministry and the European affairs ministry while former PD prime minister Paolo Gentiloni looks certain to become Italy’s next EU commissioner — appointments that should guarantee smooth ties with Brussels.

The prospect has cheered investors and Italian bonds have rallied strongly over the past week, with 10-year yields touching a new record low of 0.803% on Wednesday. They were above 1.5% at the start of August.

Prime Minister Giuseppe Conte, a law professor with no party affiliation, led his new team of seven women and 14 men in the swearing-in ceremony in the gilded presidential palace.

Italy’s 67th government since World War Two contains few political heavyweights, with an emphasis more on youth than experience. “It will be a fine adventure,” said Education Minister Lorenzo Fioramonti.

In the clearest break from the past government, the interior ministry, previously headed by the League’s tough-talking leader Matteo Salvini, was handed to a career civil servant and immigration specialist Luciana Lamorgese.