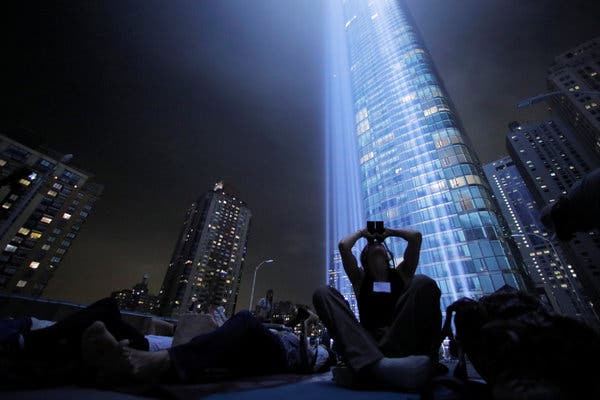 Every year on September 11, two soaring beams of light turn on over Lower Manhattan in a glowing tribute to those killed 18 years ago. Observers looking closely can spot dots and shapes gathering inside the towers of light, moving, multiplying, wheeling lower and lower.

These dots are actually birds, who are drawn to the light along with insects and bats. The birds circle these lights, seemingly unable to veer away, and are pulled off course, putting them at risk of deadly exhaustion or injury.

Sometimes, their calls to one another can be heard, which increase, scientists say, with their confusion.

By twist of fate, the anniversary of the September 11 attacks coincides with a much older yearly ritual: the migration of birds across New York City as fall approaches.

The convergence creates a spectacle that is eerily beautiful, yet according to one study endangers some 160,000 birds a year, starkly illustrating the perils of humans and animals sharing an urban ecosystem.

The tiring detour through the beams of light can put birds at risk of starvation or injury to populations already threatened by light pollution, collisions with buildings, habitat destruction and climate change.

Since 2005, bird scientists, ecological volunteers and the memorial’s sponsors have worked together to try to reduce the harm — a collaboration now yielding new scientific insights and increasing support for protecting birds in New York and other cities.

Around sunset, as the beams become visible, volunteers and scientists — along with September 11 emergency responders, survivors and relatives of victims who are invited to view the tribute — gather on the roof of a parking garage near the base of lights close to the World Trade Center site.

With the help of binoculars, radar and the naked eye, the professional scientists and the volunteers count the trapped birds, which often include small songbirds like Canada and yellow warblers and American redstarts.

Nighthawks and bats come too, to prey on insects, and peregrine falcons show up to feed on the smaller birds. When the number of trapped birds reaches around 1,000, the lights are switched off for 20 minutes to let the birds disperse.

Susan Elbin, an ornithologist and the director of conservation and science at New York City Audubon, an advocacy group, finds herself awed by the nightlong vigil.

“It’s very solemn,” she said. “The lights just sort of appear in the darkness and go on forever”— 4 miles up — “and when the sun rises the next morning it just disappears.”

She added, “It’s my job to turn the lights out, and I’d rather not have lights on at all, because the artificial light interferes with birds’ natural cues to navigate.”

But she also understands the importance of the tribute: Last year, she recalled, a visitor told her that his friend, an emergency responder unable to travel because of an illness he contracted working at ground zero, could see the tribute from his town on Long Island, and felt disturbed every time it shut down to let the birds fly away.

But according to radar studies by Ms Elbin and other scientists, the 20-minute breaks are enough to allow birds to resume their migration.

The light tribute attracts bird densities up to 150 times their normal levels. One study conducted on seven anniversary nights between 2008 to 2016 concluded that the lights affected the migrations of 1.1 million birds.

Collisions with buildings, especially ones with transparent or reflective windows, kill 600 million birds a year across the country, and as many as 230,000 in New York City, according to NYC Audubon.

The problem at the tribute, Ms Elbin said, is that the immense lights can leave birds exhausted and disoriented, making them more vulnerable as they continue their migration.

“Light lures them in, and glass finishes them off,” she said.

Another risk is that by flying in the lights, birds could use up too much of the fat they store for energy for migration, she said.

“They only have enough to get where they need to go; the fatter you are the more energy it takes to fly, so it’s a fine balance,” she said.

The September 11 bird-watching ritual has attracted a following; there are waiting lists to join the 20 volunteers each year.

It has also bolstered a growing movement called “community science,” in which members of the public help professional scientists collect data, increasing the scale of research and helping connect volunteers to their environment and to science.


The radar studies are now being used by scientists and advocates to raise awareness about the ecological impact of light pollution in cities across the globe.

The monitoring is being expanded to look at the effect of the lights on insects, which also suffer migration disruption and can burn to death.

On Tuesday, the New York City Council is holding a committee meeting on a bill to require new or renovated buildings to use more bird-friendly glass. A similar campaign is underway in Chicago.