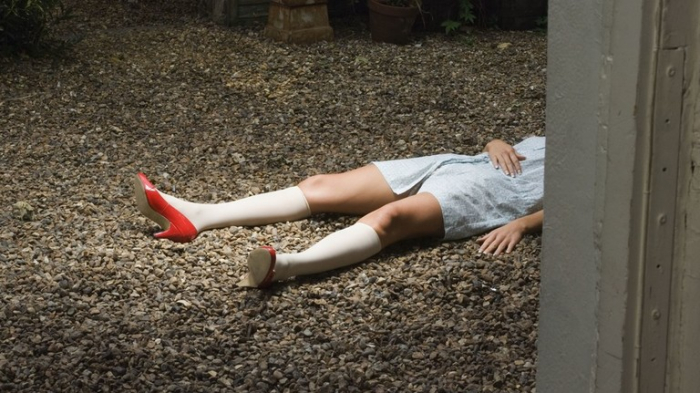 A Kazakh news outlet was forced to remove photos of models in H&M clothes portraying victims of brutal crimes. The pictures caused vast outcry in the country where violence against women has become a pressing issue.

One photo featured a girl lying on the bathroom floor with a bloodied knife beside her, while in another a female victim was shown with the zipper on her pants unfastened, suggesting that she might have been raped. Photographers from the Buro 24/7 Kazakhstan website also tackled the themes of murder by gun and suffocation.

The authors of the photoshoot explained their bizarre creative decision by saying that the H&M collection they were promoting was inspired by the 1970s, featuring turtlenecks, flared pants and pleated skirts in typical warm colors. They apparently only remembered this period as “the heyday of serial crimes in the US… Charles Manson, Ted Bundy, Edmund Kemper, Jerry Brudos became a sort of celebrities back then. Nowadays, films and TV shows with star actors are made about them.”

Predictably, this did little to persuade potential buyers – and they made their opinions plain in comments online.

“What is this horror?” one commentator wondered while browsing the photos. “Promoting violence against women? How ‘cool’!” another Instagram user added. “How could H&M greenlight this?” was another frequent question regarding the photoshoot. However, it turned out that the world’s second-largest clothing retailer was completely unaware about the serial crime-inspired photoshoot.

After removing the pictures from its website and Instagram page, ‘Buro 24/7 Kazakhstan’ issued an apology, saying “that the idea of the piece wasn’t approved by the head office of the brand and was utterly and completely the initiative of the editorial staff.” “The photoshoot is in no way trying to excuse or romanticize violence... We understand that photo-materials are of delicate nature and ask to forgive us for the possible impression they could’ve made,” the outlet said.

The apology caused even more negative comments, as readers accused Buro of insincerity.

“They’re basically saying: ‘Excuse us that you so sensitive,” one of the commentators pointed out. The others complained that the fashion journalists never really understood what kind of “savagery” they had produced.

Controversy over the photoshoot comes amid a contentious debate on violence against women in Kazakhstan. Official statistics show there were 1, 450 rape and sexual abuse cases in the country last year. Activists insist that the actual figures are much higher and that Kazakhstan takes the sad first place in the number of rapes among all former Soviet republics. Activists also demand stricter punishments for the perpetrators, as rape is considered a moderate crime under Kazakh law. In one recent case that attracted public attention, two railroad conductors were sentenced to just 2.5 years each for gang-raping a female passenger.