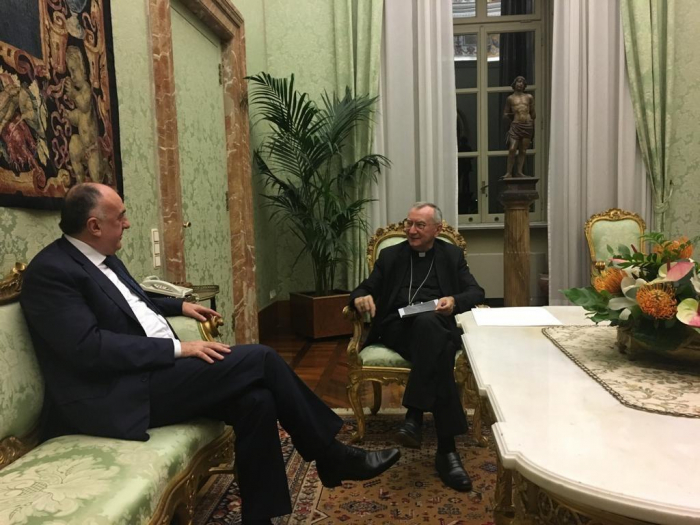 At the meeting the sides expressed satisfaction over the existing cooperation relations between Azerbaijan and the Holy See and noted that the exchange of high level visits give an impetus to further development of the relations.

Stressing that Azerbaijan stands on the front lines in terms of promoting the multicultural values, Cardinal Pietro Parolin highly valued the multicultural activities of the First Vice-President Mehriban Aliyeva and emphasized in this regard with satisfaction the projects implemented in Vatican with the support of Heydar Aliyev Foundation, including the restoration of the Altar of Saint Peter’s Basilica, the Catacombs in Rome and the Catacombs of San Sebastian.

Minister Elmar Mammadyarov informed his counterpart on the current situation of the settlement process of the Armenia-Azerbaijan Nagorno-Karabakh conflict, noted that the irresponsible behavior of the Armenian leadership serves the escalation in the region.

At the meeting the invitation by the Caucasus Muslims Office on the “World Religious Leader’s 2nd Baku Summit” to be held in Baku on 14-15 November of this year was presented to the Secretary of State of His Holiness the Pope.

The sides also discussed the regional and global issues of mutual interest.