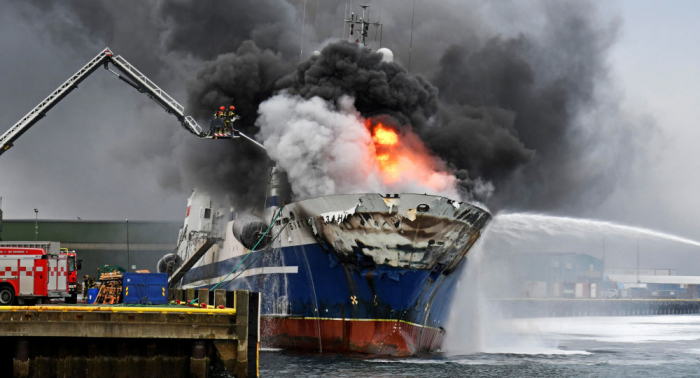 The ship's owner has attributed the fire that broke out on board the Russian trawler Bukhta Nayezdnik to repair work, Sputnik reports.

The trawler Buktha Nayezdnik, part of the Murmansk Trawl Fleet, has caught fire at Breivika quay in Tromsø, northern Norway. The fire broke out Wednesday around noon, escalated in the evening and has still not been fully contained.

The blaze reportedly rages on as hydraulic oil and trawls in the bow of the ship have caught fire.

According to Norwegian national broadcaster NRK, all 29 crew members were evacuated. Of them, twelve were sent to medical facilities for examination.

​After midnight, the Norwegian police evacuated 92 residents from a 300-metre zone surrounding the vessel due to the danger of an ammonia explosion.

The Tromsø fire department, the Norwegian Coastal Administration and the Coast Guard are struggling to extinguish the blaze. The airport in Tromsø is also helping with the emergency work.

“The trawler was under repair at the Norwegian port. Previously, a fire had broken out during welding works”, the shipowner, Karat Group said, adding that the vessel is insured.

The emergency services are expecting pollution after the fire and are preparing for diesel leaks, if the trawler sinks.,

“We are working on two alternatives: either let the boat sink to cool it down, or set up a safety zone,” Chief of Staff at Troms Police District Morten Pettersen told NRK. “The ammonia tank is a concern. If we get an ammonia explosion, it's a very unfortunate situation,” he added.

​“It is difficult to get to where it is burning, so the fire spreads backwards in the boat,” chief of operations Knut Slartmann told NRK.

A boat with a water cannon is now assisting in the relief efforts.

The Sterkoder-type Bukhta Nayezdnik was built in 1991 in Norway. At 64 metres long, it has a displacement of 2,878 tonnes and a total crew of 46 people. The ship specialises in haddock and cod fishing in the Northeast Atlantic.