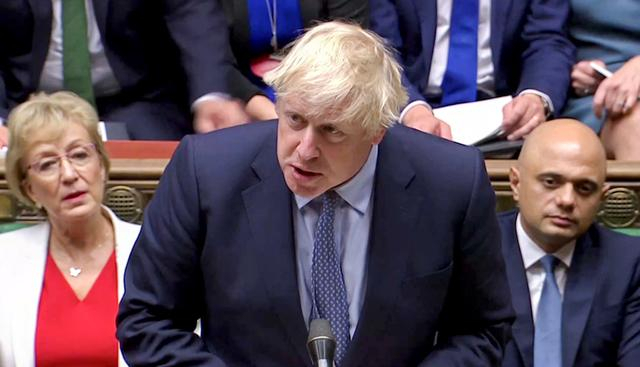 European Union officials expressed doubt on Thursday that the latest British proposals on Brexit could yield an agreement before an Oct. 31 deadline, with one saying Prime Minister Boris Johnson’s plan “can’t fly” as it stands, Reuters reported.

But the bloc was careful not to dismiss the proposals too soon and both sides are treading carefully to avoid any blame should the tortuous divorce process end in a crash.

More talks between both sides’ Brexit negotiators are due on Friday but the bloc has already made it clear Johnson’s plans - which principally involve arrangements for the border between EU member Ireland and the British province of Northern Ireland - are nowhere close to unlocking a deal.

They can only be a starting point to more talks, according to officials and diplomats dealing with Brexit in EU hub Brussels.

“It does not contain any decent solution for customs. And it erects a hard border on the island of Ireland,” said a senior EU official, saying the plan “can’t fly” as it stands.

An EU diplomat said the plan would need to be fundamentally reworked to become acceptable. Time was short before EU leaders meet in Brussels on Oct.17 and 18 for a make-or-break Brexit summit, the person said.

Johnson hopes to seal an agreement then and take Britain out of the bloc two weeks later.

However, the British parliament has passed a law saying the country cannot leave without a deal and must ask for an extension if it gets nowhere at the EU summit. Johnson vows to take Britain out on Oct.31 but has not explained how he would get around that.

He has also pledged not to request another delay to Brexit, already postponed twice from its original date last March.

The EU is also worried about the lack of a parliamentary majority for any Brexit accord after a divorce deal it had struck with Johnson’s predecessor, Theresa May, was rejected three times in the House of Commons.

The European Parliament, which must sign off on any final Brexit deal, has a group of lawmakers dealing with Brexit known as the Brexit Steering Group (BSG) who met with the bloc’s negotiator Michel Barnier late on Wednesday.

“The BSG did not find these last minute proposals, in their current form, represent a basis for an agreement to which the European Parliament could give consent,” said the latest draft of the lawmakers’ statement seen by Reuters ahead of release.

“The BSG has grave concerns about the UK proposal, as tabled, both in terms of its content and timing.”

In Dublin, Irish Junior Finance Minister Patrick O’Donovan said Johnson’s offer was the basis for discussions but not of an agreement.

Jean-Claude Juncker, the head of the European Commission - the EU’s executive negotiating Brexit for the other 27 member states - was due to talk to Irish Prime Minister Leo Varadkar later on Thursday.

The European Central Bank’s Luis de Guindos said separately that markets may not be fully pricing in the negative impact of any disorderly Brexit.

BALL IN WHOSE COURT?
The cool reception from Brussels to Johnson’s proposals indicates just how far apart the two sides are on the first departure of a sovereign state from the EU, which was forged from Europe’s ruins after World War Two.

“There are problematic points in the UK’s proposal and further work is needed. This work is for the UK to do, not the other way around,” Commission spokeswoman Natasha Bertaud said.

Britain, however, stressed it was the EU’s turn to move.

“It is now for the EU to respond and also show they can be creative and flexible. This sets out the broad landing zone,” Brexit Secretary Stephen Barclay said.

“These are serious proposals and clearly we need to have a negotiation with the EU on taking them forward,” Barclay said.

The EU has several issues with the British plan, which London wants to replace the contentious Irish “backstop” provision that has proven the biggest obstacle to a deal.

It is a fallback mechanism to maintain the Irish border open after Brexit, when border checks with EU would be needed.

It would achieve both of the seemingly contradictory goals by keeping Northern Ireland in the EU’s orbit after Brexit, meaning some controls would take place between the province and the mainland United Kingdom.

That has been flatly rejected by the British parliament as tearing the United Kingdom apart. Johnson’s latest plans seeks to alter the backstop, including by allowing for a single regulatory zone for animal, food and manufactured goods on the island of Ireland.

But it would also give Northern Irish authorities the right to decide every four years after Brexit about whether they would continue aligning themselves with EU rules on goods. The EU worries this would give the regional executive an effective veto on the bloc’s own affairs.

It was unclear what would happen if the currently suspended Northern Irish executive was not in place, or refused to agree.

Secondly, the EU said the proposed customs arrangements were wobbly and it was taken aback by London’s suggestion that it would need to change its own customs rules to accommodate the plan.

Thirdly, the EU said the plan would actually re-erect border controls on the island of Ireland - not for regulatory matters but for customs - undermining the 1998 Irish peace which ended three decades of conflict in Northern Ireland.

Other EU concerns relate to proposed VAT arrangements and fair competition clauses, which it says are insufficient to protect its single market from future competition from Britain.

The EU said some of the paln was not fleshed out in enough legal detail and that London was proposing to settle them only after Brexit, which it rejects as unacceptable.