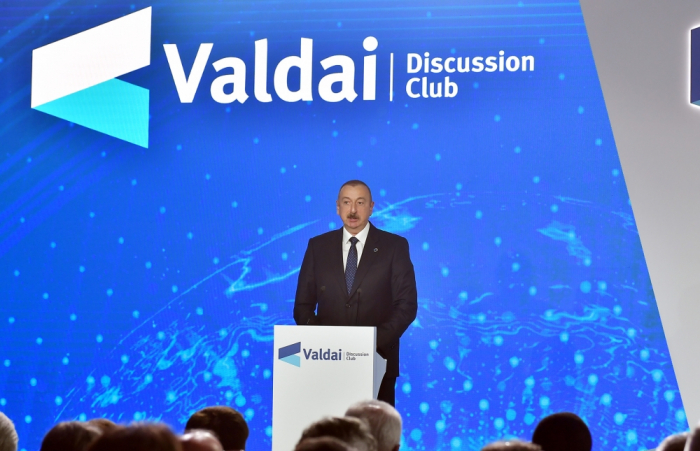 The plenary session of the 16th Annual Meeting of the Valdai International Discussion Club was held in the Russian city of Sochi on October 3.

Russian President Vladimir Putin and King of Jordan Abdullah II in their speeches at the session noted that the issues on the agenda relate to Asia.

The Azerbaijani president then addressed the meeting.

President Aliyev thanked his Russian counterpart for the invitation to the session and hailed the development of Russia-Azerbaijan relations.

Speaking about the Armenia-Azerbaijan Nagorno-Karabakh conflict, the head of state noted that the four UN Security Council resolutions on the conflict resolution have not been fulfilled for more than 25 years.

President Aliyev stressed that the Armenian prime minister’s statement “Karabakh is part of Armenia and a full stop” is a lie.

“Karabakh is a historical and ancestral land of Azerbaijan. So Karabakh is Azerbaijan and an exclamation mark,” the president added.