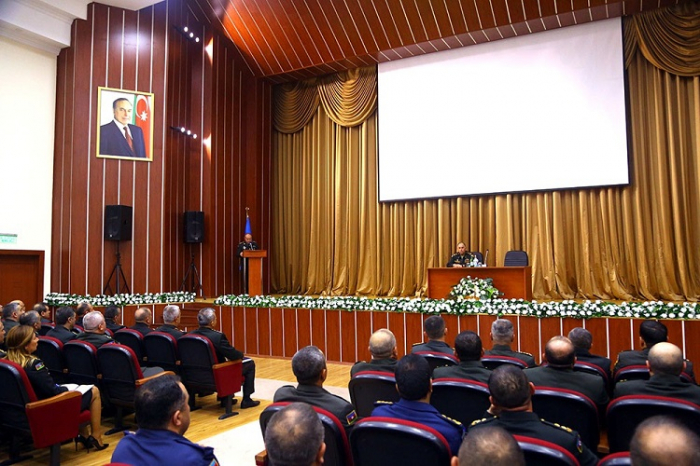 The meeting on the analysis of the state of military discipline and combat readiness in the Baku Garrison following the third quarter of 2019 was held at the Training and Education Center of the Armed Forces. The event was attended by the commanders of military units, the heads of special military-educational institutions located in the garrison, and other officials, Azerbaijani MoD told AzVision.az.

During the meeting, the Deputy Minister of Defense, Lieutenant General Kerim Veliyev has delivered a report on the work done in the garrison and the successes achieved and brought to the officials the relevant instructions to increase the combat readiness of the military personnel and military discipline.

Deputy Minister of Defense especially stressed that the “Karabakh is historical, eternal Azerbaijani territory. Thus, Karabakh is Azerbaijan and exclamation mark” expression of the President of the Republic of Azerbaijan, Commander-in-Chief Ilham Aliyev in the plenary session of the XVI annual meeting of the Valdai International Discussion Club, held in Sochi, established great enthusiasm in the army.

The Lieutenant-General has assigned specific tasks for officials to strengthen military discipline among military personnel, to strengthen control over the provision of fire safety and fire prevention measures, as well as to the strict implementation of security measures during practical classes and exercises, to improve driver professionalism and compliance with the rules of the road.