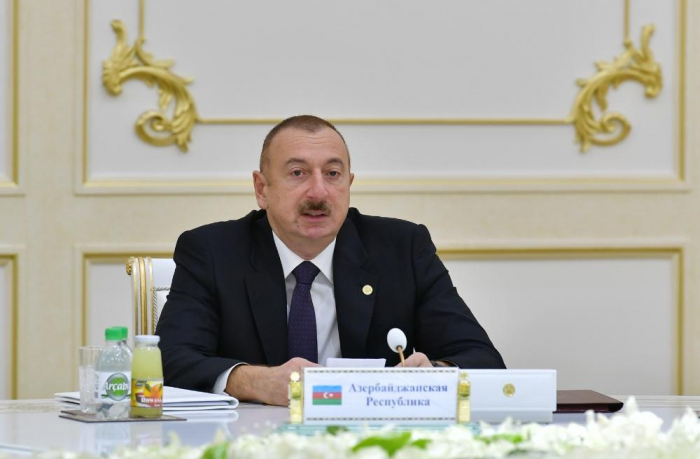 The format, in which discussion was held in the capital of Turkmenistan - Ashgabat at the meeting of the Council of CIS Heads of State, was successfully chosen, well-known Azerbaijani political analyst, former diplomat Fikret Sadikhov told Trend on Oct. 12.

Sadikhov made the remarks while commenting on Azerbaijani President Ilham Aliyev’s speech at the meeting of the Council of CIS Heads of State in Ashgabat.

In his words, the topic related to the fact that the 75th anniversary of the end of World War II will be marked in 2020 was chosen timely and in this context the Azerbaijani president’s speech was topical.

“The Azerbaijani president’s speech dealt a powerful blow to Pashinyan in response to his acquittal of the criminal acts of the Armenian terrorist,” Sadikhov said.

"Moreover, this blow was dealt not only to the personality of Garegin Nzhdeh, who collaborated with the Third Reich, but also to the Armenian current regime, which protects the bloody crimes of the war criminal,” the analyst said. “In his speech based on arguments, the Azerbaijani president referred to the encyclopedic sourсes, documents, various sources confirmed by the military historians, scholars.”

“Therefore, the fact that Pashinyan, who was struck by a powerful informational and ideological blow, was in complete prostration, is not surprising,” Sadikhov said. “I think that he is unlikely to recover from this blow soon.”

“The fact that the Armenian prime minister delivered miserable speech to protect the war criminal once again showed that he is deeply involved in dirty affairs and in every possible way defends the accomplices of the Third Reich, whose hands are in the blood of people who defended their land,” the analyst said.

“Pashinyan’s excuses were really miserable and primitive and I think everyone who attended this meeting made the right conclusions from that situation, "Sadikhov said.

"I think this is the very case which can be named the active informational and diplomatic offensive, which was once again demonstrated by the Azerbaijani president," Sadikhov said.

Garegin Nzhdeh is considered the founder of the theory propagating hatred on national and ethnic grounds in Armenia.

More than 10,000 Azerbaijanis were killed by detachments led by Nzhdeh, 115 Azerbaijani villages were destroyed in Zangezur district in 1918-1920. At the same time, he is one of the authors of “Great Armenia” idea.

The goal is to create “Great Armenia”, first of all, through the lands of Azerbaijan and other neighboring countries. After the end of World War II, the military tribunal of the former USSR condemned Nzhdeh as a war criminal.