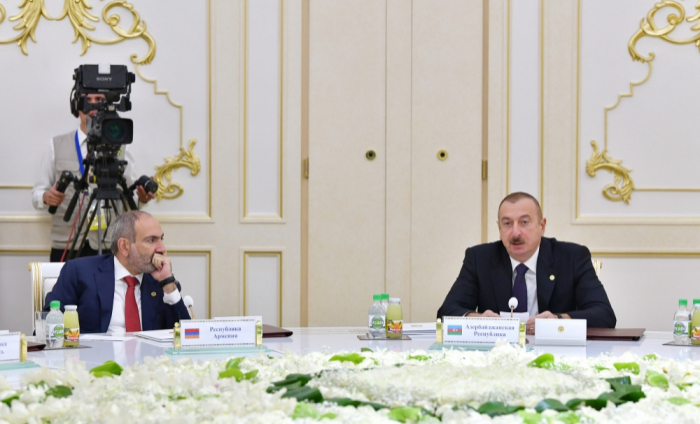 Next year will mark the 75th anniversary of the victory over fascism. Therefore, one of the issues on the agenda of the summit of the CIS Heads of State in Ashgabat was the appeal of the heads of state to the peoples of Commonwealth countries and the world community in connection with the 75th anniversary of victory in World War II. The peoples of the CIS countries have made a great contribution to this victory… But not all!

Most of the peoples living under the umbrella of the USSR at that time were openly fighting fascism while some were collaborating with the Nazis with the purpose of defending their own interests. The Armenians particularly took an active part in this collaboration, and one disrespects the souls of millions of people who fought like men by congratulating them [the Armenians] on the 75th anniversary of the victory. It is a great historical injustice.

Enough has been written about it; facts and evidence have been revealed so far, but no one has dared to say so publicly on an important international platform. The reason is clear: to put it bluntly, it means opposing an aggressive Armenian propaganda machine that scares many. The Armenians around the world have ample opportunities for propaganda, not all politicians and leaders are likely to oppose it. However, Ilham Aliyev did not hesitate to restore historical justice.

“We [the heads of state] have repeatedly opposed the glorification of the Nazis. Unfortunately, this is happening in the CIS, in particular in Armenia, where former authorities erected a monument to fascist executioner and traitor Garegin Ter-Harutyunyan, who served German fascists under the nickname of Garegin Nzhdeh, in the center of Yerevan,” President Aliyev said at the CIS summit.

Ilham Aliyev’s remarks are based on concrete facts. First of all, he recalled that in May 2019, the Russian Ministry of Foreign Affairs issued a report “On the situation with the glorification of Nazism. The report states that “the former ruling Republican party of Armenia took steps to perpetuate the memory of such an ambiguous nationalist politician as Garegin Nzhdeh, for whom there is information on his collaboration with the Third Reich.”

The Azerbaijani president went on to say that the article headlined “The Activities of Military Counterintelligence in the Final Period of the War” in Volume 6, “Secret War, Intelligence and Counterintelligence during the Great Patriotic War”, of a 12-volume encyclopedia “The Great Patriotic War of 1941-1945”, published by the main editorial board of the Ministry of Defense of the Russian Federation chaired by Defense Minister Sergey Shoigu, provides information about Garegin Nzhdeh. The article notes that “as part of an intelligence file for Obergrupp 114 Dromedar, counterintelligence agents have identified and arrested the former general of the Dashnak army and emigrant Ter-Harutyunyan, who served the Germans under the nickname of Nzhdeh. During the Great Patriotic War, he recruited more than 30 agents of Armenian nationality in Bulgaria, participated in their training and transfer to the rear of the Red Army for acts of sabotage. Nzhdeh also participated in the Holocaust of the Jewish population of Europe. In 1942, he organized the Armenian Legion who fought against the Soviet Union.”

"In fact, Nzhdeh’s main slogan was "He who dies for Germany dies for Armenia". No comment! Nzhdeh was arrested and ended his days in a Vladimir prison. And a monument almost 6 meters high was erected to this traitor and executioner in the center of the Armenian capital in 2016. Unfortunately, the new government of Armenia did not dismantle this monument. I believe that there is no place for the glorification of fascism in the CIS,” President Aliyev said.

This accusation was serious, and Armenian Prime Minister Nikol Pashinyan, who was present at the meeting, could say nothing. At best, he [Nikol Pashinyan] could express apology to those who gained the victory and their grandchildren, as well as promise that they would try to correct the mistakes made by the then-authorities. But he made a very unsuccessful attempt to defend himself, claiming that Nzhdeh had fought against the “Turkish occupation” and the “Armenian genocide” committed by the Turks.

The fact that Pashinyan accused President Aliyev of “disrespectfulness” to the heads of state in order to avoid his factual allegations is simply ridiculous. Because Ilham Aliyev, as a true diplomat, always acts in line with the protocol of the high-profile events. Using absurd expressions if there is no word to tell, is an indication of injustice and cultural ignorance.