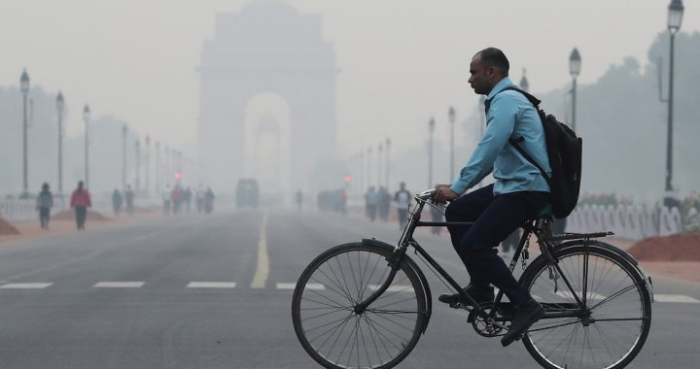 After India's biggest firework party of the year, Delhi awoke to a pollution hangover Monday with the capital forced to breathe hazardous levels of toxic particles, AzVision.az reports citing AFP.

A thick smog engulfed landmarks such as the capital's Red Fort and India Gate while drivers had visibility cut by the haze that built up after the Diwali holiday weekend.

With the pollution threat growing over the past decade, the Supreme Court banned most fireworks for the Hindu festival of lights. However, few revellers followed the order.

Firecrackers and rockets lit up the night sky and left clouds of smoke, adding to emissions from cars and trucks and stubble fires by farmers around Delhi that have made it the world's most polluted capital.

Tens of thousands of people set off firecrackers into the early hours of Monday, pushing the government air quality index beyond the top recordable level of 999.

While the pollution was less serious than previous years, the amount of the most harmful PM 2.5 pollutants was still more than 20 times international safe levels at several locations in the city of 20 million people during commuting hours.

The 2.5 particulate matter (PM2.5) measures less than 2.5 microns and can penetrate the lungs through the blood system, causing serious respiratory and heart diseases.

Experts say the toxic cocktail that hits Delhi and other Indian cities each winter causes the premature deaths of more than one million people each year.

Weather officials said moderate winds will help clean the city's air but that increased fires on farms in Haryana and Punjab states was a particular threat.

Thousands of farmers in Haryana burn their rice and wheat stubble in between planting new crops sending clouds of smoke toward Delhi.

Experts say this contributes a fifth of the PM2.5 pollution that hits each year, while the millions of vehicles on the roads and unregulated construction and factory emissions are the major cause.

The government has taken a slew of anti-pollution measures in recent years, including shutting down thermal power plants and banning construction during the pollution season.

In November, a bid to reduce road traffic will be introduced with odd and even registration plates allowed on Delhi roads on alternate days.