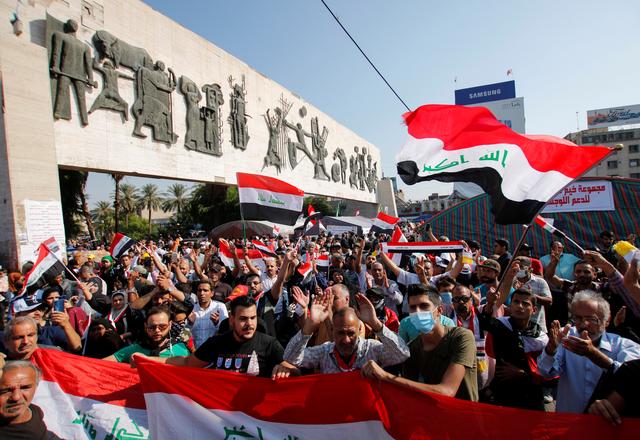 Security forces killed a protester and wounded 91 others in Baghdad on Saturday, security and medical sources said, as tens of thousands of Iraqis gathered in mass anti-government protests in the capital and blocked roads leading to a major port.

Protesters have been congregating in the capital’s central Tahrir Square for weeks, demanding the fall of the political elite in the biggest wave of mass demonstrations since the fall of Saddam Hussein.

Protests have accelerated dramatically in recent days, drawing huge crowds from across sectarian and ethnic divides.

They have been comparatively peaceful by day, becoming more violent after dark as police use tear gas and rubber bullets to battle self-proclaimed “revolutionary” youths. More than 250 people were killed in October.

Clashes have focused on the ramparts to the Republic Bridge leading across the Tigris to the heavily fortified Green Zone of government buildings, where the protesters say out-of-touch leaders are holed up in their walled-off bastion of privilege.

Security forces on Saturday erected concrete walls on one of Baghdad’s main streets which leads into Tahrir Square in an attempt to reduce the turnout but a spontaneous protest in which crowds surrounded soldiers driving bulldozers forced them to take the structures down.

The protests, driven by discontent over economic hardship and corruption, have broken nearly two years of relative stability in Iraq.

Despite the country’s oil wealth, many live in poverty with limited access to clean water, electricity, health care or education. The government of Prime Minister Adel Abdul Mahdi, in office for a year, has found no response to the protests.

Operations at the port, which receives the vast bulk of Iraq’s imports of grain, vegetable oils and sugar, have been at a complete standstill since Wednesday.

On Friday, both the teachers’ and lawyers’ unions said they would extend strikes they declared last week. Schools had been due to reopen on Sunday after a week of cancelled classes.

Many see the political class as subservient to one or another of Baghdad’s main allies, the United States and Iran, who use Iraq as a proxy in a struggle for regional influence.

The root cause of grievances is the sectarian power-sharing system of governance introduced in Iraq after 2003.

“We want an end to sectarian power-sharing, jobs should not be doled out based on whether you are Sunni or Shi’ite. We want all these parties gone and replaced with a presidential system,” said 22-year-old law student Abdulrahman Saad who has been camped out in Tahrir Square for nine days.

Iraq’s official rights watchdog, the Iraqi High Commission for Human Rights, said authorities were violating human rights and using excessive force against protesters by firing rubber bullets and tear gas canisters, which have killed scores after striking them directly in the head and chest.

A government committee investigating violence from Oct. 1-7 itself found that 149 civilians were killed because security forces used excessive force and live fire to quell protests.