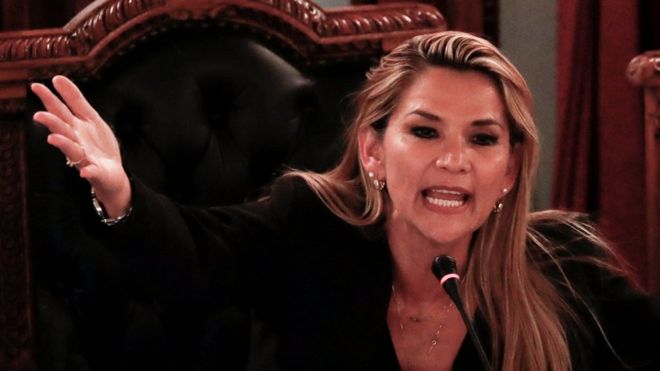 Lawmakers from Mr Morales' party boycotted the session, meaning there was no quorum for the appointment.

But Ms Áñez said she was next in line under the constitution and vowed to hold elections soon.

The former president has fled to Mexico, saying he asked for asylum there because his life was in danger.

He resigned on Sunday after weeks of protests over a disputed presidential election result. He has said he had been forced to stand down but had done so willingly "so there would be no more bloodshed".

How did the senator become interim president?

Ms Áñez took temporary control of the Senate on Tuesday, putting her next in line for the presidency.

The former deputy Senate leader assumed the position following a series of resignations.

The parliamentary session to appoint her was boycotted by lawmakers from Mr Morales' leftist Movement for Socialism party, who said it was illegitimate.

"Before the definitive absence of the president and vice president... as the president of the Chamber of Senators, I immediately assume the presidency as foreseen in the constitutional order," Ms Áñez said to applause from opposition lawmakers.

Taking to Twitter from Mexico, Mr Morales condemned the "sneakiest, most nefarious coup in history".