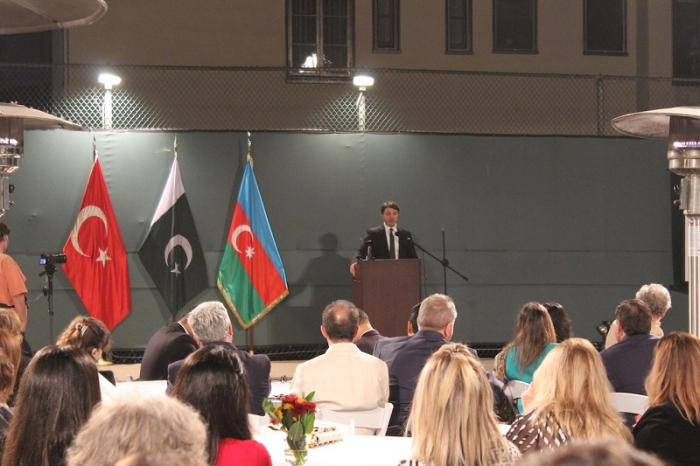 It should be noted that the First Annual Azerbaijan-Pakistan-Turkey Brotherhood Celebration was hosted at the Consulate General of Azerbaijan in 2018.

At this year's celebration again the communities of all three brotherly countries came together. Almost 150 leaders and members of Azerbaijani, Pakistani and Turkish communities hailed the strong ties among our nations.

The special guests of this year’s celebration were a delegation of the Azerbaijani community of the Nagorno-Karabakh region of Azerbaijan, consisting of the chairman of the community Tural Ganjaliyev, as well as members of its Board Durdane Agayeva, Jeyhun Alakbarov and Gulmammad Mammadov.

In his remarks, Tural Ganjaliyev informed the attendees about the ongoing military occupation and ethnic cleansing of Azerbaijan’s Karabakh region by neighboring Armenia. Ganjaliyev also highlighted the cultural cleansing carried out by Armenia against Azerbaijani heritage in the occupied territories of Azerbaijan. He thanked the Pakistani and Turkish communities of Los Angeles for constantly supporting Azerbaijan’s just position in this painful conflict.

The event was received with much interest and all three communities decided to further strengthen their cooperation and coordination in Los Angeles.

Alongside the Consulates General, the Council of Pakistan was one of the co-sponsors of the celebration.


More about: #Azerbaijan   #US