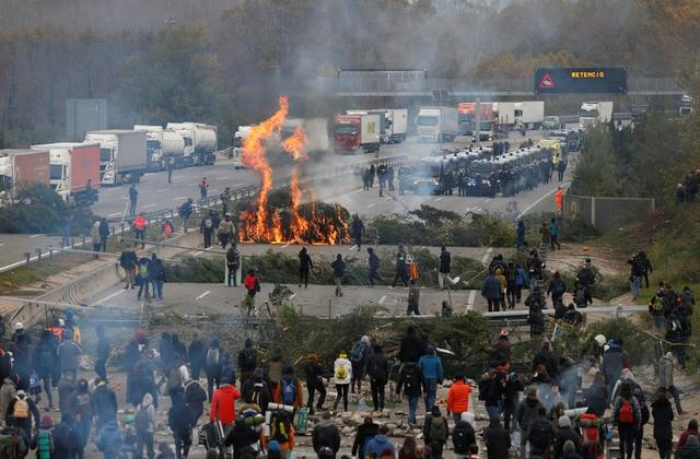 Spanish police on Wednesday cleared out scores of protesters supporting Catalan independence who had trapped around 500 vehicles while blocking a major highway for more than 15 hours.

Regional and national police said they had dislodged around 200 protesters who had shut traffic on both sides of the AP-7 highway near Girona, a city with a strong Catalan pro-independence movement.

Some protesters waved separatist flags while others sported sleeping mats. Protesters burned tyres and branches as police approached early on Wednesday. Some threw small objects at police, but most walked away peacefully.

A secretive protest group called Democratic Tsunami claimed responsibility for the disruption, while another separatist group known as CDR said it had supported the protest.

Both are eager to press the case for secession, days after a national election delivered a deeply fragmented parliament that offers separatist parties a chance to play a role in unblocking the political stalemate in Madrid.

On Tuesday, French riot police used tear gas to force out protesters who spent more than 24 hours blocking the same highway where it straddles France and Spain, in a disruption also organized by Democratic Tsunami. Spanish and French police arrested 19 people, officials said.

Asked Wednesday in the Catalan parliament about the potential impact of the border protest, Catalan regional leader Quim Torra said his government guarantees “security, freedom of circulation ... and the right to protest”, stressing that protests were prompted by a “political conflict” with Spain.