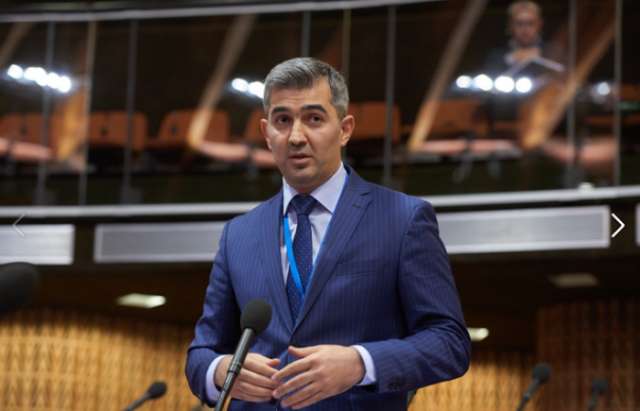 "Azerbaijan is unlikely to become a transit country for illegal migration because the authorities have “discouraged” international human trafficking rings from taking this route, Vusal Huseynov, the chief of the State Migration Service of Azerbaijan told in an interview to EURACTIV in Brussels on November 13, AzVision.az reports

He was on a visit to Brussels to meet with the immigration office of the Kingdom of Belgium, and sign a memorandum of cooperation, as well as, to hold several meetings with the European Commission justice and home affairs services.

Huseynov, a Western-trained official (Harvard University among others), spoke to EURACTIV on 13 November in Brussels. Huseynov was appointed in April 2018. Before that, he was a member of parliament and member of the Parliamentary Assembly of the Council of Europe.

He came to Brussels to meet with the immigration office of the Kingdom of Belgium, and sign a memorandum of cooperation. Also, he held meetings with the European Commission justice and home affairs services.

The Azeri official explained that the State Migration Service of Azerbaijan deals with the extension of visas, granting short and long term residence permits, work permits, citizenship matters, readmission under the respective agreements with EU partners and other states, and fight against illegal migration. It also deals with the entire migration-related database.

“Azerbaijan and the EU are getting closer day by day,” he said, adding that this included tourism. For Azeri citizens, the EU was one of the favourite destinations, he said. For this purpose, he said his country’s authorities were making every possible efforts so that citizens would not feel the burden.

For this purpose, he highlighted the electronic visa application system of Azerbaijan, called ASAN visas (an acronym of Azerbaijan Service Assessment Network, but also meaning ‘easy’ in Azeri), which allows foreigners to obtain a visa in as little as three hours, or even shorter. Both EU nationals need visas to visit Azerbaijan, and vice-versa.

Asked what kinds of problems exist, he said visa facilitation for Azerbaijan nationals travelling to the EU was being improved, although the procedure was heavier.

Regarding temporary or permanent residence, he said his country was doing its utmost to make it easy for foreigners to register, including via a mobile app called ‘Migaz’, which he demonstrated on his mobile phone and described as user-friendly.

Asked about readmission, a key request of the EU for ultimately achieving visa-free travel with third countries in its neighbourhood, he said that by the time the readmission agreement was signed (2014), 1,300 nationals of Azerbaijan have been readmitted from the entire European Union.

Readmission, he explained, was carried out based on requests from the EU countries. The number of requests was around 3,000, he said, with the remaining cases being processed.

“Visa-free is something we would like to happen, but this is not a process that depends only on one country, it requires strong will on all sides”, he said.

Asked about migration pressure from third countries to Azerbaijan, Huseynov mentioned Afghanistan, saying that some Afghans applied for asylum in Azerbaijan and then, if they obtained it, stayed in the country.

Regarding the nationalities of immigrants who sought to go to the West transiting through Azerbaijan, he named countries from South East Asia, such as Bangladesh, Sri Lanka.

Asked about international gangs dealing with human trafficking, he said such cases were detected and measures had been taken, but there weren’t many of them.

“Azerbaijan, considering the security side, is well organised. We have the capacity to detect such cases. Of course, this also has some preventive character. Those who intend to use the country as a transit point, they also know that opportunities are limited because there is a strong enforcement,” he said.

“When they put the map on the table, maybe they see that Azerbaijan is not the place they should consider when planning their way to Europe”, he said.

Asked what kind of advice he would give to EU countries experiencing massive arrivals of illegal migrants, he said the EU should invest in information campaigns to explain in the respective countries what the prospective migrants should expect from taking the risk to illegally cross into the EU and apply for asylum.

He said that most such prospective migrants imagine the generous conditions asylum-seekers enjoy in the rich EU, but hardly foresee that they could be put in a plane back to their country of origin.