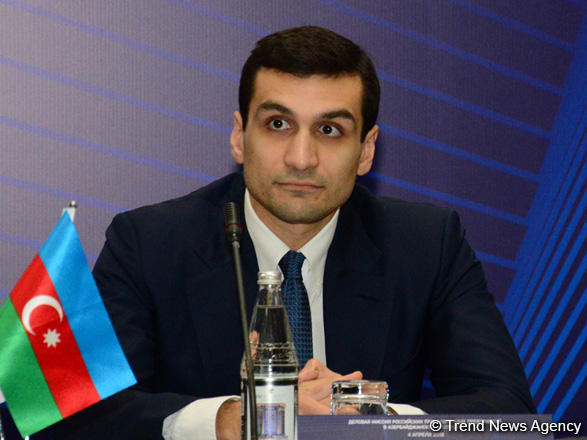 The 10th Russia-Azerbaijan Interregional Forum is an effective and long-term platform for strengthening bilateral relations, developing regional business contacts between representatives of the authorities and business of the two countries, Chairman of the Azerbaijani-Russian Business Council Samad Gurbanov said at the opening of the 10th Russia-Azerbaijan Interregional Forum in Moscow.

“Azerbaijani and Russian presidents, Ilham Aliyev and Vladimir Putin, took part in last year’s Russian-Azerbaijani forum, which was held in Baku,” Gurbanov said. “This year, the participation of Azerbaijan’s First Vice-President Mehriban Aliyeva and Chairperson of Russia’s Federation Council of the Federal Assembly Valentina Matviyenko in the forum is clear evidence of the great importance of this important international platform.”

“The primary task of the forum is to develop mechanisms to achieve the strategic goals outlined by the Russian and Azerbaijani leaders in the direction of developing trade and economic relations between the two states at the regional level,” the chairman noted. “We are witnessing a positive trend in the growth of trade turnover, as well as trade and economic relations between our countries. Growth dynamics are noted both this year and 2018, at a rate of 19 percent.”

“Azerbaijan is the main trading partner of Russia in the South Caucasus region,” Gurbanov added. “In the nine months of 2019, Azerbaijan accounted for 45 percent of Russia’s total trade turnover in the region. In turn, Russia ranks first in Azerbaijan’s non-oil exports. The sphere of trade and services, IT and high technologies between the two countries is developing steadily. At the same time, there is unrealized potential in these areas, so we need to pay great attention to these issues.”

The chairman noted that as part of the meeting program, the most relevant industry issues related to the development of the potential of the regions and cooperation in various sectors of the economy will be touched upon.

“The interaction between the Azerbaijani and Russian business councils has reached a qualitatively new level,” Gurbanov said.

“There is a continuous process of information exchange, joint establishment of direct contacts between entrepreneurs in promoting their interests, as well as real support for business projects,” the chairman added.

The 10th Russia-Azerbaijan Interregional Forum is being held Nov. 22-23 in Moscow, organized by Russia’s Ministry for Economic Development and Azerbaijan’s Economy Ministry.