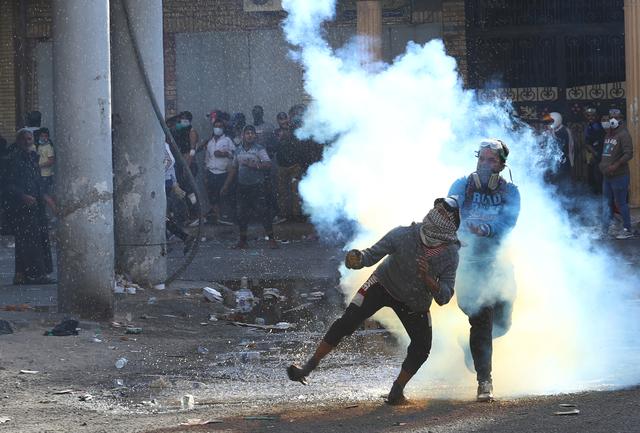 In the south, security forces reopened the entrance to Iraq’s main port, Umm Qasr, which protesters had blocked since Monday, port sources said. Normal operations had not yet resumed.

At least 330 people have been killed since the start of mass unrest in Baghdad and southern Iraq in early October, the largest demonstrations since the fall of Saddam Hussein in 2003.

Protesters are demanding the overthrow of a political class seen as corrupt and serving foreign powers while many Iraqis languish in poverty without jobs, healthcare or education.

Iraq’s top Shi’ite Muslim cleric, Grand Ayatollah Ali al-Sistani, called on Friday for politicians to hurry up in reforming electoral laws because the changes would be the only way to resolve weeks of deadly unrest.

“We affirm the importance of speeding up the passing of the electoral law and the electoral commission law because this represents the country moving past the big crisis,” his representative said during a sermon in the holy city of Kerbala.

Sistani, who weighs in on politics only in times of crisis, holds wide influence over public opinion in Shi’ite-majority Iraq. He also repeated his view that the protesters had legitimate demands and should not be met with violence.

Unsatisfied by government reform promises they see as meager, many protesters have turned to civil disobedience tactics in recent weeks.

They had previously blocked Umm Qasr from Oct. 29-Nov. 9, apart from a brief resumption of operations for three days. It receives imports of grain, vegetable oils and sugar shipments that feed a country largely dependent on imported food.

The initial blockage cost Iraq more than $6 billion during just the first week of the closure, a government spokesman said at the time.

Protesters in Baghdad are also disrupting traffic, and are still holding ground, controlling parts of three major bridges which lead to the capital’s fortified Green Zone, where government buildings and foreign embassies are located.