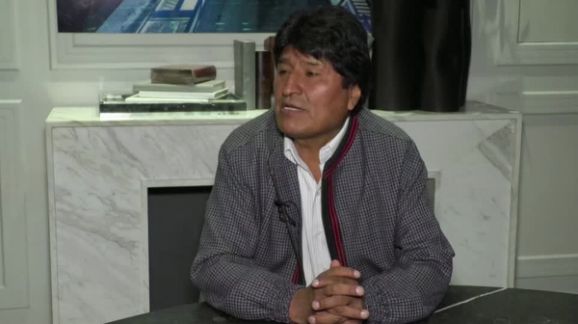 Bolivia’s interim government filed a criminal complaint on Friday against former President Evo Morales for alleged sedition and terrorism, the interior minister said, as authorities began probes of his allies that they accuse of corruption and fomenting unrest, AzVision.az reports citing Reuters.

Interim President Jeanine Anez, a former senator and opponent of Morales, has faced a wave of demonstrations by his supporters since taking office in a power vacuum last week.

Morales and his vice president stepped down under pressure from security forces and anti-government protesters on Nov. 10, amid reports of irregularities in the Oct. 20 election. Morales fled to Mexico and says he was toppled in a coup.

At least 29 have been killed in clashes since he resigned.

Interior Minister Arturo Murillo said he asked the public prosecutor’s office to open an investigation into Morales, based on audio in which, from Mexico, Morales allegedly directed plans for road blockades in Bolivia to destabilize the interim government.

Reuters could not verify the authenticity of the audio, which was played to reporters at a news conference earlier this week. Morales’ former health minister, Gabriela Montano, called the audio “fake.”

Murillo told journalists outside the prosecutors’ office in La Paz: “The evidence is clear. We’ve presented it.”

Morales could not immediately be reached for comment. He said on Twitter that authorities should be investigating the death of protesters instead of going after him on the basis of what he described as fake evidence.