Brain-dead at 70? NATO set to ask 'wise persons' for help 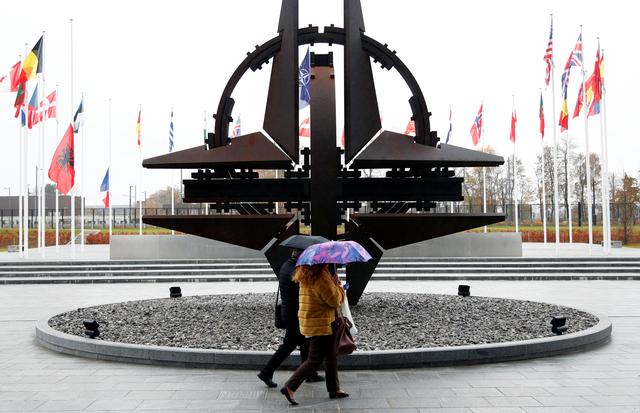 NATO is expected to ask a group of “wise persons” to help reform the alliance after U.S. President Donald Trump questioned its relevance and French President Emmanuel Macron said it was dying.

At a London summit on Dec. 4 marking NATO’s 70th anniversary, leaders of the 29 member states will try to put on a show of unity but face questions about the future of the U.S.-led alliance.

Washington’s allies in Europe and Canada are uncertain what to expect from Trump after he criticized Germany at a NATO summit in July 2018 and mulled quitting the alliance before praising it and taking credit for promised reforms.

Since then, Macron has also vented his frustration, over what French diplomats say is NATO’s lack of coordination at a political level and a failure to tackle taboo subjects. In Macron’s words, NATO is “experiencing brain death”.

His remarks followed a U.S. troop withdrawal from Syria which prompted Turkey to launch an offensive against YPG militia in northern Syria which it sees as terrorists although they helped Washington defeat Islamic State. Ankara’s NATO allies fear the assault will undermine the battle against IS militants.

To address the concerns about NATO’s future, the summit is likely to adopt a Franco-German proposal to create a group of respected figures under alliance Secretary-General Jens Stoltenberg, diplomats said.

The “wise persons” would report back in late 2021, when NATO is due to hold its next summit, setting the ground for reform.

“We are trying to channel the electric shock produced (by Macron’s comments) to structure a political debate,” said a senior French diplomat involved in discussions.

The aim is to secure a “re-balanced transatlantic alliance,” the diplomat said, with Europe recognizing Washington is carrying too much weight.

The group would probably be small, with a mix of elder statespersons and others who can propose more radical ideas.

As a gesture to Trump, a summit deal is expected for U.S. allies to share more of NATO’s running costs and reduce Washington’s share of annual funding for NATO headquarters and staff from 2021.

Leaders are also set to meet a U.S. demand that European allies have more NATO battalions, ships and planes ready for combat as deterrence against a potential Russian attack.

WHAT WILL TRUMP SAY?

“Of course no-one knows what Trump will say,” said a senior European NATO diplomat. “But now we don’t know what Macron or (Turkish President Tayyip) Erdogan will say either.”

The one-day summit at a luxury golf club will be unusually brief to reduce the scope for diplomatic disputes though Britain is eager to host the showcase event as it prepares to leave the European Union.

The North Atlantic Treaty Organization was created in 1949 to confront the threat of the communist Soviet Union but found renewed renewed purpose after Russia annexed Crimea in 2014.

NATO is now under pressure to help solve some of the world’s most intractable crises and Washington has pushed it to consider its position on China, a growing military power.

“The strain on the system is big,” Norwegian Lieutenant-Colonel Stein Grongstad told Reuters during training of Norwegian soldiers who will help train local government troops in Iraq under a NATO flag.

“It is difficult for the army to do territorial defense, training and international operations at the same time.”

This is sensitive for Germany, which is Europe’s biggest economy but has struggled with outdated weaponry and does not aim to meet NATO’s minimum spending target for individual nations until 2031.

“But the question is still whether politicians are ready to spend so much money,” a German defense source told Reuters.