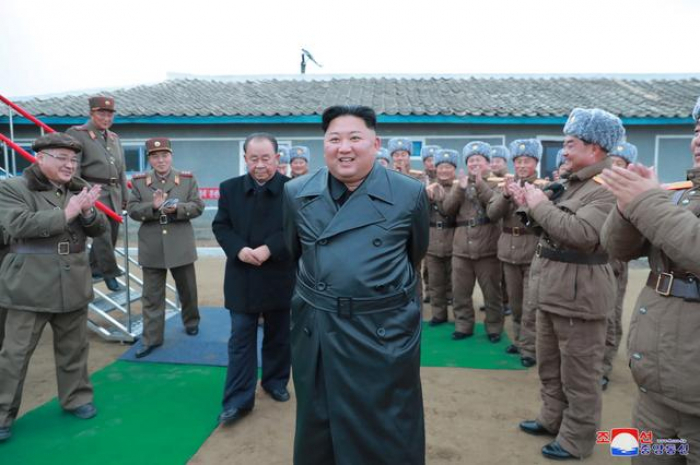 North Korea fired two short-range projectiles into the sea off its east coast on Thursday in a fourth test of its new “super-large multiple-rocket launcher”, South Korea’s Joint Chiefs of Staff (JCS) said told a briefing.

The latest test of the so-called KN-25 missile came as a Thanksgiving Day reminder to the United States of a year-end deadline Kim has set for Washington to show flexibility in their stalled denuclearization talks.

The series of tests since the KN-25 was first unveiled in August show the North Koreans steadily improving their ability to quickly fire multiple rockets from their mobile launch vehicles.

That capability makes it more likely that in case of a war, North Korean rocket crews could speedily deploy, fire and move before being targeted by South Korean or American forces, experts said.

“The faster it fires, the quicker it can (get) out of dodge before counter-fire arrives,” Jeffrey Lewis, a missile researcher at the James Martin Center for Nonproliferation Studies (CNS), said on Twitter.

“READY FOR DEPLOYMENT”
In the first two KN-25 tests in August and September missiles were fired 17 minutes and 19 minutes apart, respectively, the JCS said.

By the end of October crews had narrowed that interval to three minutes, while on Thursday the gap between the two missiles was only about 30 seconds.

“The volley test-fire aimed to finally examine the combat application of the super-large multiple-launch rocket system proved the military and technical superiority of the weapon system and its firm reliability,” KCNA said.

Photos released by KCNA showed missiles being fired from a transporter-erector-launcher equipped with four launcher tubes.

The missiles traveled up to 380 km (236 miles) and reached an altitude of 97 km, according to the JCS, putting nearly all of South Korea within range.

“North Korea is trying to selectively modernize conventional forces in a low-cost, high-efficiency way to focus on the economy and reassure the military while nuclear talks are under way, and the rocket launcher is a product of that effort,” said Kim Dong-yub, a former South Korean Navy officer who teaches at Kyungnam University in Seoul.

“The latest test indicated that the system was ready for mass production and deployment.”

COUNTDOWN TO A DEADLINE
A spokesman at Seoul’s Unification Ministry in charge of inter-Korean affairs on Friday urged the North to cease acts that may heighten military tension and return to dialogue.

Kim has set a end-year deadline to re-start the talks with the United States which remain stalemated after a working-level meeting last month broke down.

A projectile is fired during North Korea's missile tests in this undated picture released by North Korea's Central News Agency (KCNA) on November 28, 2019. KCNA via REUTERS
Early this year, it tested new missiles with similar features to Russia’s SS-26 Iskander which are relatively small yet easier to hide, launch and maneuver in flight.

North Korea has demanded biting sanctions be lifted and warned it could take a “new path,” raising concerns it may resume nuclear and long-range missile testing suspended since 2017.

U.S. top nuclear negotiator Stephen Biegun said last week the year-end deadline was an artificial one, but could mean a return to “provocative” steps that preceded the past two years of diplomacy.