We will contribute to Europe’s energy security with TANAP, says Turkish President 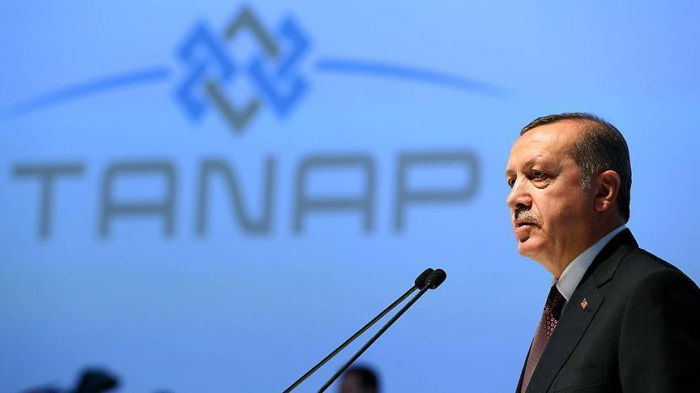 “We made great efforts for completion of TANAP project”, Turkish President Recep Tayyib Erdogan said at the opening ceremony of TANAP-Europe connection, held in Ipsala district of Turkey’s Edirne Province.

Turkish President stated works, done for the realization of the project, have not been wasted.

“Despite tens of dangers and conflicts, we overcome within or outside of the country, we developed TANAP as it was planned, and brought it at the current stage. The part of an amazing project of energy entitled “Silk Road”, which is related to our countries, has been completed in accordance with our targets on time planned beforehand. We will contribute to the energy security of Europe, besides providing energy requirements of our countries with TANAP”, Erdogan added.

“We connect Europe and Asia with TANAP project. We successfully complete a long and hard process, lasting for 7,5 years, thanks to joint efforts of Turkey, Azerbaijan, and Georgia”, he noted.

Turkish President stressed Azerbaijani President Ilham Aliyev has great work on completion of the project, which is main part of South Gas Pipeline: “Personal initiatives and attention of my dear brother Ilham Aliyev to this project are undeniable.”

Erdogan said this project, in addition to ensuring energy supply, was first of all a peace and solidarity project: “It is a symbol of deep-rooted friendship between Turkey and Azerbaijan. TANAP has come to this phase thanks to the mutual trust of Turkey and Azerbaijan. This pipeline passing through 20 provinces, 67 districts and 600 villages of Turkey has already reached the border of Europe. By means of TANAP, 16 billion cubic meters of Azerbaijani natural gas have been delivered to our country, of which Turkey will benefit from 6 billion cubic meters, and Europe will benefit from 10 billion cubic meters”.

He said in order to reach Europe having passed through territories of Azerbaijan, Georgia and Turkey, the TANAP pipeline would be connected to TAP pipeline (Trans-Adriatic Pipeline) and stated that the TAP project would be completed by 2020. He also stated that such countries as Greece, Albania, Bulgaria, Macedonia and Bosnia and Herzegovina will benefit from this project.