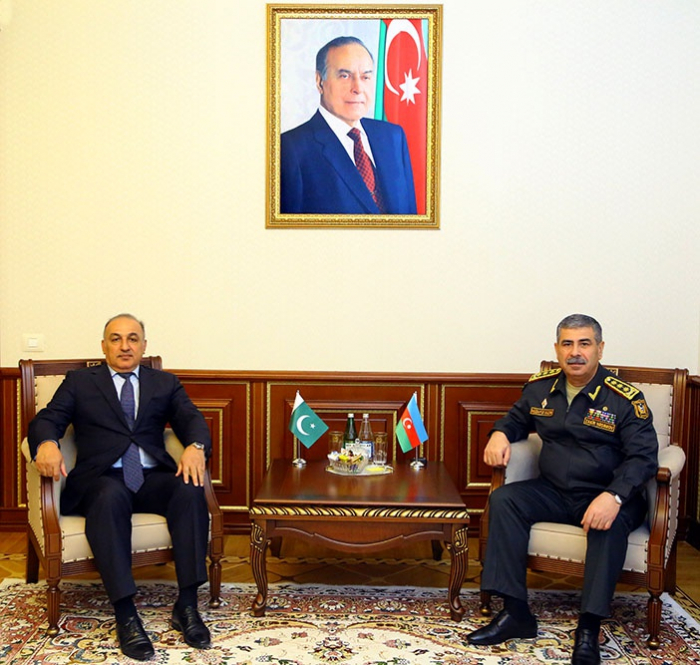 At the meeting, the sides, noting that military relations are in the interests of both countries considered it important to intensify efforts in this area. During the discussion of the latest developments in the region, an exchange of views was held on conducting joint military exercises with the involvement of various types of troops, including Special Forces of Azerbaijan and Pakistan, organization of mutual visits of servicemen to exchange experience, as well as number of other issues.

Touching upon the military-political situation in the region, Minister Hasanov expressed gratitude for Pakistan's support of Azerbaijan's position in settlement of the Armenia-Azerbaijan Nagorno-Karabakh conflict within the international organizations and stressed that Azerbaijan also supports the territorial integrity of Pakistan.

Expressing gratitude to the ambassador for his efforts in expanding relations in the military and military-technical spheres between Azerbaijan and Pakistan over the period of his diplomatic mission, the minister wished him success in his future activity.

The diplomat, in turn, noted that he is parting with Azerbaijan with good impressions and will forever remain a sincere friend of the Azerbaijani state and people. The diplomat noted that despite the long distant location of our countries from a geographical point of view, friendly relations have historically been formed between the two countries’ peoples. Stressing that relations in various spheres were developed and sufficiently strengthened, he noted the great potential for military cooperation between the two countries.