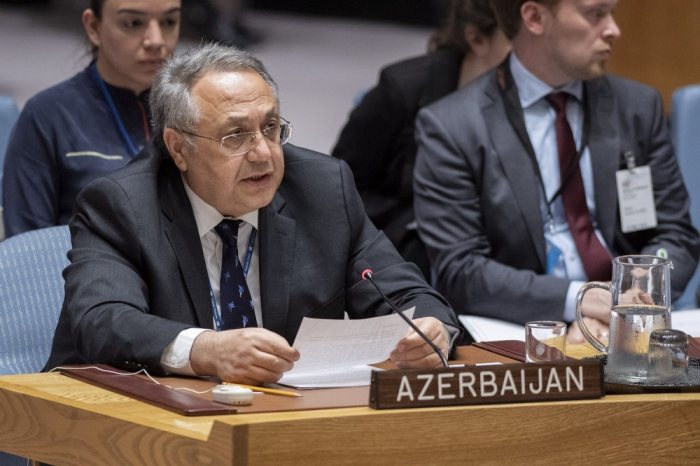 In this regard, representative of the Republic of Azerbaijan to the United Nations Yashar Aliyev sent an official letter to UN Secretary General Antonio Guterres.

In this letter, the Azerbaijani diplomat wrote that the Convention on the Prevention and Punishment of the Crime of Genocide is one of the first international treaties, which the Republic of Azerbaijan joined after regaining its independence and becoming a UN member.

“The universal ratification of the Convention will become an important consolidated commitment of the international community to the eradication of the crime of genocide,” the representative of the Republic of Azerbaijan to the United Nations added.

The Azerbaijani diplomat emphasized the importance of the UN mandate to prevent genocide and the concept of “responsibility to protect” in promoting national and international efforts to protect population from genocide, war crimes, ethnic cleansing and crimes against humanity.

“Proceeding from its own experience, Azerbaijan knows about the "flagrant calamity" of genocide,” the letter said. “The memory of thousands civilians who died as a result of the massacres committed by the Armenian armed forces in 1918 is revered on March 31, which is marked as the Day of Genocide of Azerbaijanis.”

“Heinous acts of violations of international humanitarian law, equal to war crimes, crimes against humanity and acts of genocide, were committed during the war launched by Armenia against Azerbaijan in the late 1980s,” the Azerbaijani diplomat said.

“The biggest massacre during the conflict was committed against civilians in Khojaly city in Azerbaijan’s Nagorno-Karabakh region in February 1992,” the Azerbaijani diplomat added. “As a result of the attack and occupation of the city by the Armenian forces, hundreds of Azerbaijanis, including women, children and the elderly, were killed, injured or taken hostage, while the city was fully destroyed.”

“The Armenian forces’ cruelty in Khojaly is shocking,” the letter said. “Six families were completely destroyed; 25 children lost both parents and 130 children lost one parent; 56 men were burned alive, scalped, tortured, beheaded or blinded; while pregnant women were stabbed with spike-shaped weapons.”

“It is important for the international community to think about the tragedy in Khojaly and other Azerbaijani cities, settlements and villages,” the Azerbaijani diplomat said. “Yerevan's stubborn denial of responsibility for the heinous crimes committed during the aggression against Azerbaijan is a challenge to the international law and human rights, as well as a direct obstacle to lasting peace and genuine reconciliation.”

“Although international norms and standards, along with institutional activity, have greatly developed during these years, civilians still suffer as a result of the armed conflict,” the letter said.

“Among other most important measures required to effectively combat impunity, it is also important to make sure that the efforts to establish peace and preventive diplomacy help ensure accountability and, under no circumstances, allow or support situations arising as a result of the unlawful use of force and other gross violations of the international law such as genocide, war crimes, crimes against humanity and ethnic cleansing,” the Azerbaijani diplomat said.

“Moreover, the Convention on the Prevention and Punishment of the Crime of Genocide was adopted in response to the widespread atrocities against civilians during the World War II,” the letter said.

“Nevertheless, there are still cases of heroizing the Nazis and their accomplices in some countries, including those countries that are trying to show themselves as ardent advocates for the protection of human rights and the program for the prevention of genocide,” the Azerbaijani diplomat added. “Such shameless hypocrisy is unacceptable and great disrespect for the memory of millions of people around the world who died for freedom from tyranny and colonization during World War II.”

In conclusion, the Azerbaijani diplomat calls for the letter to be spread as a document of the General Assembly on agenda items 31, 32, 37, 68, 75, 83 and 130 and of the document of the Security Council.

The Convention on the Prevention and Punishment of the Crime of Genocide was adopted upon the resolution 260 (III) of the General Assembly of the United Nations dated December 9, 1948 in Paris. The Convention, which entered into force on January 12, 1951, establishes the international legal status of the "genocide" concept as the gravest crime against humanity and also stipulates its legal definition.