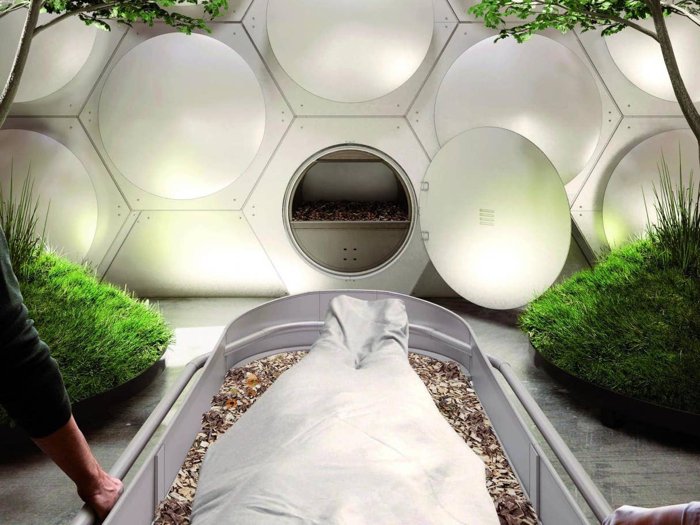 The world’s first funeral home dedicated to composting human beings is set to open in 2021 – allowing those left behind to turn their dearly departed into soil.

US ‘deathcare’ company Recompose will be able to turn the deceased into a cubic yard of soil over a period of as little as 30 days, using one-eighth of the energy of cremation and saving as much as a metric ton of carbon dioxide from being produced compared to other forms of burial.

The firm’s first site in Seattle, Washington, will be able to hold 75 people at a time.

The project was given the green light by Washington state legislators who voted to allow the style of burial known as natural organic reduction earlier this year – the first US state to explicitly do so.

Set to take effect in May 2020, the law will allow funeral homes to carry out the contained, accelerated conversion of human remains to soil, an idea spurred on by Recompose as a means to ensure environmentally friendly burials can occur in cities and urban areas lacking in natural burial grounds.

More people are looking to reduce their carbon footprint to limit their damage to the planet amid increasing concerns about the effects of climate change.

“We asked ourselves how we could use nature – which has perfected the life/death cycle – as a model for human death care,” said the firm’s CEO Katrina Spade. “We saw an opportunity for this profound moment to both give back to the earth and reconnect us with these natural cycles.”

Based on green burials, where bodies are often buried in woodland areas to decompose, the process sees bodies placed in reusable vessels covered in woodchips, alfalfa and hay, and sealed away in hexagonal tubes.

There the corpse’s temperature is regulated while its surroundings are aerated, allowing naturally occurring bacteria to break down the body over the course of four to seven weeks.

The deceased is then returned to their loved ones as compost, limiting the carbon footprint from cremations and traditional burials while cutting out the embalming fluid chemicals which can leach into the soil and can pollute groundwater.

Some remains are expected to be donated to a land soil project to provide a forest on the state’s Bell Mountain with additional nutrients, with one person creating 2,000 to 3,000 pounds of soil.

“These days, some families regard even ashes from cremation as a burden, not a joy,” Ms Spade told the Seattle Times. “As in, ‘We’ve had these ashes in the garage for six years’. And we’re creating a cubic yard of soil.”