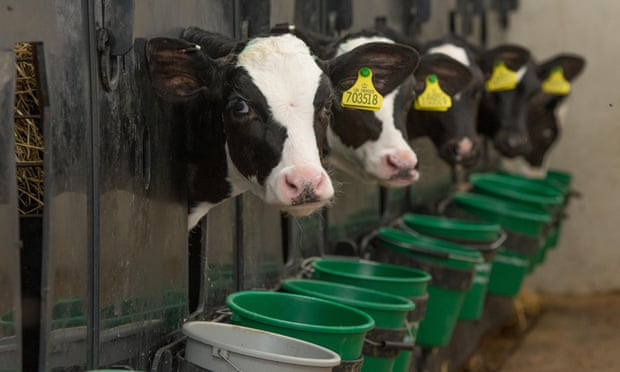 Livestock production needs to reach its peak within the next decade in order to tackle the climate emergency, scientists have warned.

They are calling for governments in all but the poorest countries to set a date for “peak meat” because animal agriculture is a significant and fast-growing source of global greenhouse gas emissions.

Cattle and sheep emit large amounts of methane while forests are destroyed to create pasture and grow the grains that are fed to intensively reared animals.

The world’s scientists agree that huge amounts of carbon dioxide will have to be removed from the atmosphere to limit global heating to 1.5C. More than 80% of farmland is used for livestock but it produces just 18% of food calories.

Reducing meat and dairy, and eating plant-based diets instead, would free up land to be returned to natural forest. Researchers say that is the best option currently available for storing large amounts of carbon.

The researchers emphasise that such changes to global agriculture are only one part of the urgent action needed to address the climate crisis. Slashing fossil fuel use is vital, as is action in other sectors, such as transport.

In a letter to the Lancet Planetary Health journal, the researchers call on countries to “declare a timeframe for peak livestock”, after which production would not increase. Negotiators are at a UN climate summit in Madrid, hoping to make progress towards ambitious new climate pledges in 2020.

“Countries should be looking for peak livestock within the next 10 years,” said Helen Harwatt, a fellow at Harvard Law School in the US and lead author of the letter. “This is because we need steep and rapid reductions in greenhouse gas emissions, as we are reaching dangerous temperature tipping points.”

“Food demand is expected to increase massively as our population expands toward 10 billion,” said Prof Matthew Betts at Oregon State University, US, and another author of the letter. “Reducing human demand for resource-intensive animal protein would considerably slow the rate of global forest loss, with huge benefits for biodiversity and ecosystem services, in addition to carbon storage.”

The letter is supported by more than 50 leading experts, including Prof Pete Smith, at the University of Aberdeen, UK, a senior author of the Intergovernmental Panel on Climate Change report on land use and climate change, published in August.

“Ruminant meat is 10 to 100 times more damaging to the climate than plant-based food,” he said. “As a planet, we need to transition away from a dependence on livestock, just as we need to to transition away from fossil fuels, if we are to have any chance of hitting the goals of the Paris climate agreement. Livestock numbers need to peak very soon and thereafter decline substantially.”

Smith said it was up to individual governments to set their own targets for peak livestock. “However, given the urgency of the climate emergency, this will need to be over the coming decade for sure,” he added.

“But the transition will need to be managed fairly to allow citizens to change diets and for farmers, producers and agri-food chains to diversify. In poor countries, where over 800 million people are still undernourished, priorities obviously differ.”

Other supporters of the letter include Prof Sir Ian Boyd, until recently the chief scientific adviser to the UK government on environment, food and farming, and Walter Willett at Harvard University, who led the work on the first science-based planetary health diet, published this year.

Of the world’s mammals, 60% ,by weight, are livestock, 36% are humans and only 4% are wild mammals, according to 2018 research by Prof Ron Milo, at the Weizmann Institute of Science in Israel, who also backed the letter.

Harwatt said the changes needed to achieve peak meat were feasible, as farming could change faster than other sectors where infrastructure, such as power stations, had lifespans of decades.

She recognised that much lower levels of meat consumption required significant changes in behaviour but said: “I see many more vegan options today [in the UK] that were not there even a year ago.

“We’re fully aware that our call requires large-scale change across society and isn’t something that can be achieved overnight or without challenges.”

Harwatt said climate change would have huge impacts on society, and passing peak meat would help limit the damage, as well as reduce ill-health and help wildlife. “This isn’t hardship,” she said.