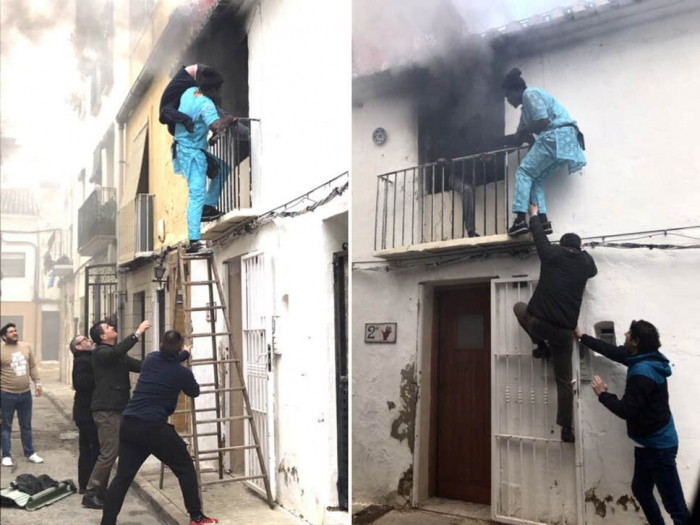 Spain is considering giving residency to an undocumented migrant who saved a wheelchair-bound man from a fire.

Gorgui Lamine Sow, 20, was walking through the coastal city of Denia on Friday when he heard screams coming from close by.

The street seller rushed over to where a crowd stood watching as black smoke poured out of the window of a second-floor flat.

Without a second thought, the Senegalese father-of-one dropped what he was carrying and began scaling the building.

He said: “They told me there was a man trapped inside the apartment. I didn’t think about it. I just dropped my things and started climbing.”

Mr Sow managed to scale the balcony and enter the burning apartment, where he threw the disabled resident over his shoulder and carried him down a ladder set up by a neighbour.

Local media later identified the victim as 39-year-old Alex Caudeli Webster, who had not been out of the flat for months.

Neighbour Roberta Etter said: “If Gorgui had not pulled Alex to safety when he did then Alex would not have survived. Gorgui literally saved his life.”

But as emergency officials neared the scene, Mr Sow, who lives with his girlfriend and seven-month-old daughter in the nearby city of Gandia, panicked.

He said: “If the police saw me they would confiscate my goods and if they take them from me, we’re not eating tomorrow.”

After ensuring the man he had rescued was OK, he picked up the bracelets and necklaces he was selling and left the scene.

Mr Webster was treated for burns and smoke inhalation and is now reportedly staying with a friend.

The story of the dramatic rescue made waves across the country, drawing comparisons with Mamoudou Gassama – a migrant from Mali who was nicknamed “Le Spider-Man” after he scaled a Paris apartment block to save a boy dangling from a fourth-floor balcony last year.

Mr Sow, who found out days later that neighbours were hailing him as a hero, insisted: “I’m just happy that the man is fine.”

After Mr Gassama’s rescue attempt went viral in May 2018, Raphaël Glucksmann, a French journalist and MEP argued that migrants should not have to perform superhuman acts to be treated as human beings.

He wrote on Facebook: “I admire the bravery of Mamoudou Gassama – but I dream of a country where it would not be necessary to scale a building to save the life of a child, at the risk of one’s own life, to be treated like a human being when you are a migrant.”

Mr Sow, who arrived in Spain in 2017, said it would make life much easier for his family.

He said: “There are people who, when I try to show them stuff, they don’t look at me, they won’t talk to me. It’s really difficult to do this job.”