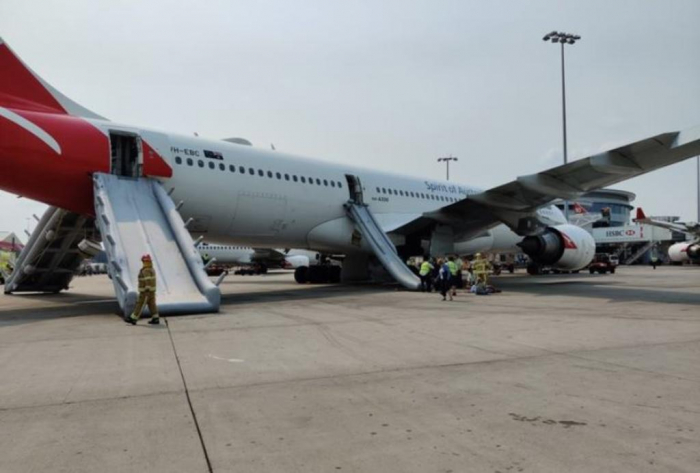 Passengers on a Qantas Airways Ltd flight evacuated their plane via emergency slides at Australia’s Sydney airport on Sunday after the flight was forced to turn around, AzVision.az reports citing Reuters.

In a statement, Qantas said flight QF575 to Perth returned to Sydney shortly after takeoff due to a hydraulic issue.

“Once back at the gate, the captain made the decision to evacuate the aircraft as a precaution and three emergency slides were deployed,” the statement said.

Qantas said engineers were inspecting the aircraft, an Airbus A330-200 that can carry up to 271 passengers.

The Australian Broadcasting Corporation (ABC) reported that the plane was stuck on the tarmac after landing and smoke began to fill the cabin.

“We were on the runway waiting to be towed in and we started to smell burning,” the ABC quoted passenger Dillon Parker as saying.

A Qantas spokeswomen told journalists at Sydney airport that it was her understanding that there was mist in the cabin.

“I think perhaps some of the hydraulic fluid was pumped in by the air-conditioning system, I haven’t heard of any indications of smoke,” the spokeswomen said in a televised press conference.

“It may have appeared like smoke but it was mist from the hydraulic system.”

One passenger, Ally Kemp, said on Twitter that the experience was “terrifying”.

“Just had to evacuate my flight to Perth after engineering issues. Everyone had to exit the plane via slide onto Sydney tarmac after the cabin filled with smoke and the captain screamed evacuate,” she tweeted.