Zimbabwe VP's wife charged with trying to kill her husband 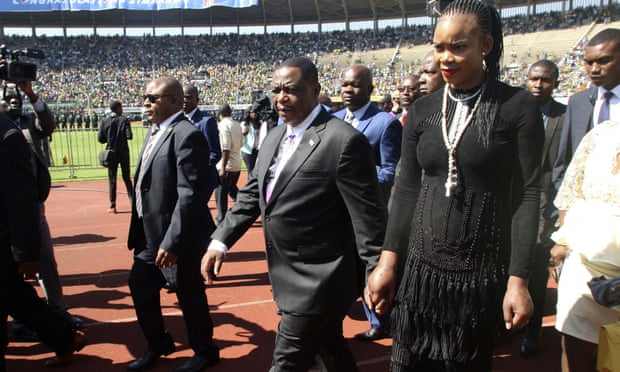 The wife of Constantino Chiwenga, Zimbabwe’s powerful vice-president, has been accused of attempting to kill her husband by disconnecting his life support while he was undergoing critical treatment in hospital earlier this year.

Marry Chiwenga, née Mubaiwa, was arrested at the weekend and remanded in custody on Monday after appearing at Harare’s magistrates court. She was accused of illegally transferring almost US$1m (£740,000) overseas to purchase luxury cars and property and faces additional charges of attempted murder.

Chiwenga, who played a leading role in ousting the late former president Robert Mugabe in a military takeover in 2017, has suffered a serious disease of the oesophagus, which makes eating difficult and has required months of hospital treatment. The 63-year-old former army chief is a controversial figure and blamed by many for recent waves of repression in the former British colony.

The court case and accusations will focus attention once more on Zimbabwe’s opaque political elite, which is frequently accused of graft and incompetent economic management, and the significant wealth of some individuals.

Police documents allege that Mubaiwa travelled to South Africa with her seriously ill husband in June and attempted to prevent him seeking medical attention, until his security detail intervened.

In July, Mubaiwa entered the private hospital in Pretoria where her husband was being treated and told staff to leave her alone with him before disconnecting vital equipment, police allege. When security personnel and medical staff once more intervened, she then left the hospital, the documents claim.

Chiwenga was later treated in China and has since returned to Zimbabwe.

Mubaiwa has said she is innocent of any wrongdoing.

Zimbabwe’s anti-corruption commission brought the fraud and money laundering charges against Mubaiwa. The commission has pursued a series of high-profile figures during the last year, jailing several of them.

Critics say the commission is highly politicised and its targets are all enemies of senior officials in the government of president Emmerson Mnangagwa.

Local media reported that the marriage of the former beauty queen and the former head of the armed forces had collapsed.

Zimbabwe faces a profound economic crisis exacerbated by drought. Millions of people there are reliant on food aid. Many of the problems are a legacy of decades of mismanagement under Mugabe, who died in September.

The rising prices have reminded many of the economic collapse just over a decade ago, when hyperinflation emptied shelves of basic foodstuffs and led the country to abandon its currency.

The situation in rural areas is particularly bad, aid workers in Zimbabwe say, though there is growing evidence of widespread malnutrition in cities too.